6 6 Oct, 2019
marc marquez, maverick viñales, andrea dovizioso, Fabio Quartararo, Thailand MotoGP 2019
Marc Marquez has sealed his sixth MotoGP title (eight across categories) after defeating Fabio Quartararo (Yamaha) on the last corner of the Buriram circuit at the Thailand MotoGP 2019. Maverick Viñales, unable to keep up with the two titans at the lead, has taken third place ahead of a disappointing Andrea Dovizioso.

With this, his ninth victory of the season (Argentina, Spain, France, Catalonia. Germany, Czech Republic, San Marino, Aragon. Thailandia) and with four races still remaining in the calendar, the champion from Cervera has got himself a spot among the three greatest MotoGP pilots of all times.

Marc Marquez is now just one title away from Valentino Rossi and two from Giacomo Agostini. Across all motorcycling categories, Agostini remains first with 15 titles, followed by Angel Nieto (13) and Rossi (9).

The Chang layout has seen a thrilling head to head between the Spaniard and the 20-year-old rookie, whom, despite his youth, has made Marc Marquez sweat the victory out. Both have made the delights of fans with some very vibrant final laps. Competition in its purest form. 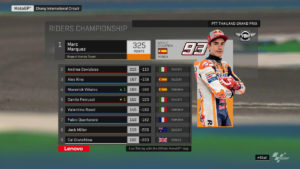 Being ahead of the Ducati #4 during the race, the #93 didn’t really need a victory in order to seal the title. Dovizioso was the only pilot able to delay his coronation. The Spaniard’s winning instinct, however, has taken him to the top of the podium again to celebrate his new feat. It is in his DNA.

Pole-holder Fabio Quartararo was Marc Marquez‘ main rival for Sunday’s glory, and the later, well aware of this, prevented his escape right from the very beginning of the race. As soon as the lights went off, the Spaniard passed Viñales for second and got hot on the heels of the Frenchman, who had managed to keep the first place.

Copying his main rival, Dovizioso climbed from seventh to fourth right at the start. The initial race line up was therefore made up of Fabio at the lead followed by Marc Marquez, Viñales, Dovizioso, Morbidelli, Mir, Rossi and Rins.

WIth 24 laps to go, the French rookie was flying ahead with the #93 glued to his back wheel and both of them watched closely by a wonderful Rins. A bit further back Rossi was passing Mir for sixth. Meanwhile, Quartararo broke the fast lap record at the Thai track. He was trying hard to get away… But he couldn’t.

Three laps later (and 21 till the end) and everything remained unchanged. Marc was still behind Fabio with Dovizioso in fourth position. If things had ended there, the Spaniard would still have become champion but, Would he settle for second? Unlikely considering the Spanish pilot’s thirst for victory. 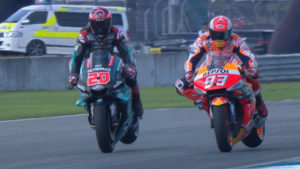 The leading duo was, in fact, imposing a rhythm which none of the rest was able to follow. Only Marc Márquez and Quartararo were clocking in at 1:31 per lap. Meanwhile, further back, a civil war was breaking out in Suzuki. Rins and Mir were engaged in a beautiful battle for sixth.

A great battle: Márquez vs Quartararo

Three laps later (18 to go) Fabio continued trying to escape from Marc managing a small half-a-second gap between them. Viñales was third, two seconds away from the two leaders. Further back, a sensational Mir took over Rossi for the seventh position.

Unaware of the comings and goings behind, the two protagonists of the day, Fabio and Marc, were busy trying to fend each other off. The Spaniard was on top of the French pilot, sharpening his claws and studying his every move in order to find the best time to devour his press. Marc wanted to celebrate his new title from the top of the podium. Such is the competitive mind of #93. 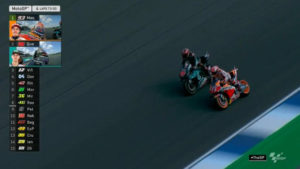 Behind them, Viñales was third and Dovizioso fourth. Six laps later or what is the same, at eleven laps from the checkered flag, only a fall could stop the Marc from getting his title. At the same time, Rins was passing Morbidelli for fifth.

Back at the top of the race and Marc and Fabio were still playing cat and mouse, a game in which the Catalan always likes to take on the role of the feline. Viñales, at 1,5 seconds from them, was sustaining a fantastic rhythm but still insufficient to reach them. 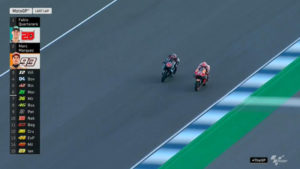 The final lap arrived with both bikes separated by a few millimetres. An electric battle in which Fabio did his best to beat Marc. The latter passed him on the last bend to become MotoGP world champion again, Marquez’ style, with a victory.