MotoGPMarquez shines in Aragon and could secure title in Thailand

23 23 Sep, 2019
ducati, maverick viñales, valentino rossi, andrea dovizioso, 2019 MotoGP, Honda HRC, Aragon MotoGP 2019, Monster Yamaha MotoGP, Marc Matquez
Following all forecasts, Marc Marquez has conquered the Aragon MotoGP 2019 this Sunday at the Motorland Aragón circuit in Spain with great authority. The Spaniard rider has shine again at this the fourteenth scale of the MotoGP World Championship calendar leaving both Andrea Dovizioso and Jack Miller (Ducati) no choice but to settle for the remaining places on the podium.

With this, his eighth victory of the season, the wizard from Cervera has celebrated his race number 200 (across all categories) in style, adding another star to his successful MotoGP career.  This has also been Marquez’ 78th victory at the Motorcycle World Championship overall, and his 52nd in MotoGP. 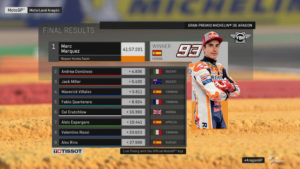 This victory also brings the Spaniard a little bit closer to obtaining his sixth MotoGP crown, and eighth across categories. He is currently 98 points ahead of second classified, Andrea Dovizioso, in the standings. If he repeats the feat in Thailand, the title is his.

Marc Marquez escapes at the start

Despite the thick cloud coverage and the odd drop of rain, the race was officially declared to be on the dry. The Honda #93, who had opted for the most conservative tire choice (medium-soft), started opening ground with the rest of the pack as soon as the traffic lights went out.

With his perfect start and his relentless rhythm, the Spaniard managed to complete lap one with a 1.1-second advantage over his pursuers. After the #93, Miller passed Viñales for third, and shortly after he repeated the move on Quartararo for second. 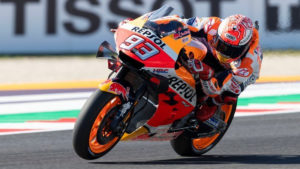 In one of the many battles that were unfolding further behind, Morbidelli hit the ground after being pushed by Rins, who had climbed from the thirteenth to the eighth place in the blink of an eye.

A bad day for the pilot from Barcelona at his home race, where suddenly things taking a turn for the worse. Rins received a long lap penalty for causing the collision with the Italian from Petronas SRT and had to bid farewell to his podium chances.

Márquez’s advantage had risen to two seconds in just three laps. No one could keep up with the brutal rhythm of the RC213V. Meanwhile, Maverick was hoping to recover the lost ground by making a pass on Quartararo. In fifth place, Aleix Espargaró was fending Dovi and Rossi off until the Ducati managed to overtake Pol’s brother.

Marc Marquez, at the lead, was displaying his overwhelming authority. By the eight lap he was 4,498 seconds ahead of Miller. Shortly after, Viñales passed the Australian from Pramac.

Dovizioso, who had been relegated to the tenth place, decided to re-join the fight for the places of honour. There is no doubt that he is a Sunday driver. The 4 of Ducati passed Quartararo and on the fourteenth lap, he was already in fourth position until he overtook Miller for third. 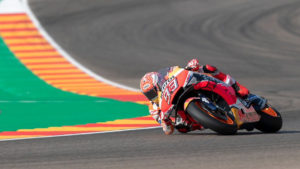 With three laps left for the checkered flag, Dovi finally took second place and held on to it until the very end. It seemed then that third place would be for Viñales but in corner 1 of the final lap, Miller stole the podium position from the Spanish driver.

By that point, Márquez had already been celebrating his new feat with the fans for a little while. As expected, the public had completely surrendered to a pilot that continues to break records and   who is on his way to becoming a motorsport legend.