Marc Márquez has won the 2019 Catalan MotoGP this Sunday at the Montemelo Circuit in Barcelona after Jorge Lorenzo wiped Valentino Rossi, Maverick Viñales and Andrea Dovizioso out in a crash.

The rookie from Petronas Yamaha, Fabio Quartararo, and Ducati’s number two, Danilo Petrucci, have escorted the Spaniard on the podium, following a great performance.

After another of his legendary comebacks, Alex Rins has finished just one position short of the podium, before Jack Miller, fifth, and his sensational Suzuki teammate, Joan Mir.

This is the fourth victory of the season for the Honda #93 after Argentina, Jerez and France. Dovi and Rins are now 37 and 39 points behind him in the standings respectively. This is what happens when champions put in the hours.

It might have been Karma or just fate but in the end, Marquez has been given back what in Austin was taken away from him. In America, he fell over just when he was racing solo towards the chequered flag. 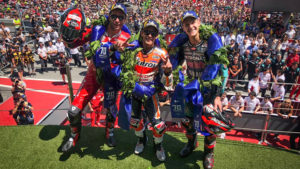 Dovi before the accident

Dovi performed a sensational start from second row, overhauling Marquez and Quartararo for first as soon as the lights went off. Viñales, after another of his magnificent starts, positioned himself hot on the heels of the Italian.

The pilot from Rosas climb from sixth to second resembled a Play Station game. An outstanding ascent also from Jorge Lorenzo on the first few metres from ten to four. 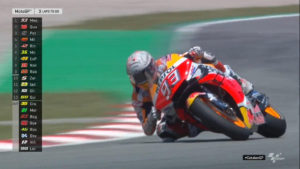 On the second turn, however, came the crash that would decide the outcome of the race. Lorenzo had just passed Dovi for first when he lost control of the front of his bike under breaking. As a result, he crashed into Ducati’s head of ranks as well as both Yamahas of Rossi and Viñales.

Seizing the opportunity, Marquez stepped up the pace and by lap three he was already 0.9 seconds over Petrucci and 1,7 over Quartararo and Rins. The pilot from Cervera was determined to uncork the champagne.

Battle between Petrucci and Rins

With just seven laps to go before the end of the 2019 Catalan MotoGP, a battle broke out between Rins and Petrucci. The Ducati #9 had overhauled the Spaniard on turn 1 and the latter had desperately tried to recover his position to no avail. 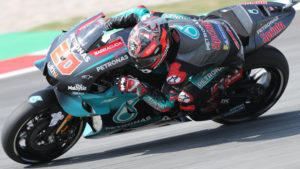 The manoeuvre backfired on the Spaniard making him fall to seventh position. Quartararo was then able to capitalise on the Italo-Spanish battle robbing the second position from Petrucci, and all this just 12 days after undergoing arm pump surgery. 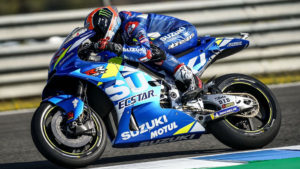 The pilot from Petronas Yamaha kept the position until the end although, at 20 years and 57 days of age, he narrowly missed the honour of becoming the youngest pilot in history to win a MotoGP.

Behind Quartararo came Petrucci for whom this is the second consecutive podium after winning at Mugello. Rins has just been left out of the podium after an epic performance ahead of Jack Miller’s Honda. An excellent Joan Mir closed the top 5.