The checkered flag is one of the most representative and well-known symbols of Motorsports. The flag is present in virtually all racing disciplines including cars, motorcycles, trucks, etc.

This iconic ‘piece of cloth’ signals the end of the race at every single Formula 1, endurance, rally, raids as Dakar in the world. Crossing the finish line first and seeing it fly is any driver’s dream. It seems as if this famous symbol had been there forever, but that’s of course not the case.

Horse racing and a tablecloth

The history of the checkered flag begins in the middle of the 19th century in the West of the United States. At that time, pioneers who inhabited the first settlements in the area used to organize horse races.

Those races used to culminate in a meal between the participants and members of the community. The feast was served on a tablecloth, which had previously been waved by the women to indicate drivers that the food was ready.

Besides this gastronomic curiosity, the most solid study on the matter dates from 2006. It is in that year that Fred Robert Egloff published a book entitled ‘Origin of the checkered flag:Egloff ‘.

His research points to horse racing – and to cycling competitions – that took place in France at the end of the 19th century. Apparently, these two disciplines used a two-colour banner as you would the current checkered flag.

Apparently, the final choice of black and white was a key decision. The combination of the two colours could be distinguished at a great distance and easily differentiated from the public in the stands.

The first picture of the checkered flag

The first known photograph of the checkered flag dates back to 1906 at the inaugural edition of the Vanderbilt Cup in New York. 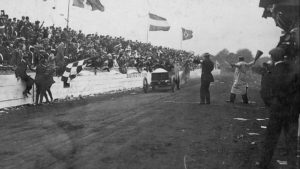 Egloff, the author of A Search for Racing’s Holy Grail’, sustains that the flag was designed by Sydney Waldon, an employee of the American automobile firm Packard Motor. He would have designed the symbol to delimit checkpoints in car races.

The checkered flag in Formula 1

The checkered flag has been present in Formula 1 right from the first race in History: The British Grand Prix of the 13th of May 1950 at Silverstone won by Italian driver ‘Nino’ Farina.

As strange as it may seem, the dimensions, design or way in which the checkered flag should be used, is not subjected to any kind of regulation. As long as it keeps its traditional chessboard print, the universal symbol of Motorsport will continue to fly in the circuits of the whole planet as an icon of the competition.

Although the aesthetics of the checkered flag has remained unchanged over the years, the place from which it is waved has done so. In the past, cars were waved from the foot of the track as they crossed the finish line. Nowadays, however, the flag is waved from an elevated platform for obvious security reasons.