Two weeks after becoming eight–time world champion in Thailand, Marc Márquez has won the Japanese MotoGP 2019 at the Motegi circuit, securing at the same time the constructor’s title for his team Honda at the manufacturer’s home race!

French rookie Fabio Quartararo (Petronas Yamaha) and Italian Andrea Dovizioso have had no other option but to settle for second and third respectively before the overwhelming superiority of the #93. Viñales was fourth after another excellent performance. 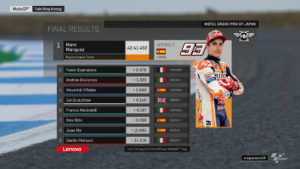 The Spaniard has had an extraordinary weekend dominating the appointment from beginning to end. This has been Marquez’ fourth consecutive victory, tenth of the season, and 80th of his motorcycling career.

Marquez has also taken the Grand Chelem (pole position, fast lap and win), and has lead every single lap. In sum, Marc’s rivals didn’t stand a chance before his crushing dominance and had to make do with whatever was left.

Marc holds on to his first position

As lights went off, Márquez hung onto his pole position ahead of Quartararo, Miller and Crutchlow, the four of whom left Morbidelli behind followed by Viñales and Dovizioso. After six laps, however, Quartararo passed Marc in an attempt to prevent him from performing one of his signature escapes. But the move from the Petronas SRT was short-lived.

A short while later Márquez was again at the lead and had passed by the finish line four-tenths of a second clear of Quartararo. It was at that point that the feared escape of the Spaniard commenced, eager as he was to get rid of his bothersome travel companion.

Signing one quick lap after another, Márquez finally got rid of his rivals. He was by this point one whole second ahead of the rest. Meanwhile, Quartararo, Morbidelli and Miller clenched their teeth and tightened their grip on the accelerator. Their efforts, however, were of no use against the #93’s relentless rhythm.

Later on, there was a moment during the race which brought about some measure of suspense. Marc’s distance from his pursuers froze. It was just a mirage.

Rather than his rivals finally catching up with him, it was the Spaniard exerting his total control over the race and deciding to be a bit more conservative with his Honda RC213V in order to regulate fuel consumption. Anecdotally, he ran out of fuel during the lap of honour and had to be towed by Syahrin.

Quartararo cannot catch up with Marc

Meanwhile, a few meters behind the leader, Quartataro had managed to get rid of Miller and Morbidelli. He still held onto the futile hope of getting close to the Spaniard’s domain. But he couldn’t.

Unfortunately for the fans, they were not given the pleasure to witness another head to head between the two strongest drivers on the grid: Quartararo and Márquez.

Halfway through the race, the Honda leader turned the pace up a notch until he was two seconds clear of anyone else and he swept to a comfortable victory. Tired of seeing the rear of the Honda RC213V, the French Devil crossed the finish line in second position once again.

The debutant of the Petronas SRT has, in any case, conquered the title of Rookie of the year 2019, and as Marc himself said to the press after the end of the race: “(Quartararo) is less and less of a rookie”.

Finally, Dovizioso entered in third position to take the one-hundredth podium of his career. The Ducati #4, who first had to overtake Morbidelli, put up a fierce defence against the attacks of Viñales in a beautiful battle very much to the delight of the Japanese fans.

The pilot from Forli demonstrated his skill with the brakes during his showdown with the Spaniard. Every time that Maverick though he had room to pass, the Italian responded by closing the gap at lightning speed. 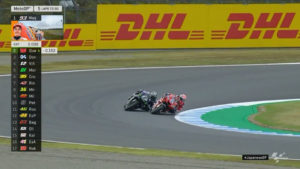 The battle continued right until the penultimate lap when Dovi finally broke off of him and escape solo towards the champagne. A few laps before that, the other official rider from Yamaha, Valentino Rossi, had suffered a fall when he was in eleventh position and fourteen seconds behind the leader.