Max Verstappen (Red Bull) has conquered his second win of the year after a thrilling driving exhibition in the wet this past Sunday at the Hockenheim circuit for the 2019 F1 German GP. The phenomenal Dutchman has kept it together even after a 360º spin and 5 pit-stops.

Also sensational was Sebastian Vettel (Ferrari) after coming back 18 places to finish second. Great performance too from Russian Daniil Kvyat who climbed 12 positions to close the podium. In another memorable Sunday, McLaren’s Carlo Sainz was fifth, just ahead of Lance Stroll and very close to the champagne. 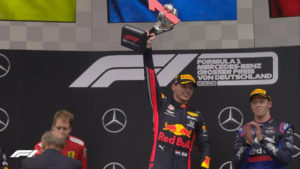 Mercedes was the great disappointment on the day with both its drivers out of the game by the middle of the race and just when it seemed they would seal another 1-2. Lewis Hamilton, P9 and Valtteri Bottas, KO. Charles Leclerc was another of the big losers on Sunday after crashing while on the leading pack.

All in all, some extraordinary performances and the unpredictable weather came together to provide a fantastic and unprecedented spectacle in Germany with three safety cars, numerous vehicles tripping across the grass and battels everywhere up and down the track. It was one of the best F1 races of thr recent years.

The great winner of the 2019 F1 German GP was Verstappen for whom this is his seventh F1 victory overall. He also took the fastest lap. Verstappen has thus climbed 21 points in the standings, where he is third ahead of Vettel.

After the British and Austrian GPs, the F1 has again delighted fans with another vibrant race. Hamilton remains on the top with 225 points, 41 more than Bottas and 63 more than ‘Mad’ Max. 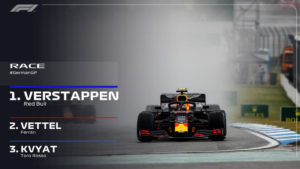 A conventional but exciting start

Cars performed a few formation laps behind the Safety Car before the start of the race to check on the state of the tarmac at the 2019 F1 German GP. Everything seemed fitting for a conventional start. The hostilities commenced as soon as the lights went off with Lewis Hamilton keeping the first place. 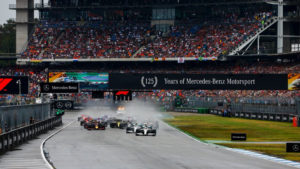 Verstappen and Gasly’s Red Bulls, on the other hand, second and fourth on the grid respectively, lost some ground at the start with Gasly dropping all the way down to eight. Numerous combats erupted simultaneously in the middle and back of the race.

Hamilton and Bottas continued their escape on the lead pursued by the wonderful Kimi Raikkonen, Nico Hulkenberg and Charles Leclerc. The young Monegasque climbed six positions to sixth in just two laps at the 2019 F1 German GP. His teammate Sebastian Vettel followed suit climbing from 20th to 13th in the blink of an eye. 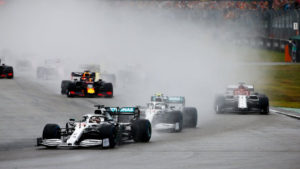 On the following lap, the Racing Point of Checo Perez would trigger the first Safety Car and the dance of the pit stops commenced. The Safety Car left on lap 5 when Hamilton was leading over Bottas by three seconds. Behind came Verstappen, Leclerc and Kimi.

On lap 15 a Virtual Safety Car was called after a fault on Daniel Ricciardo’s Renault. On resuming the race everyone settled into their positions again with Hamilton leading solo.

Bottas was at this point 5,5 seconds behind the leader. 1,5 seconds after came Verstappen and Leclerc followed in the fifth position at 5 seconds from the Dutchman.

On lap 23 came a crucial moment for the 2019 F1 German GP. The Haas of Kevin Magnussen entered boxes to mount the softest, slick compounds, and on the wet! Madness!

Incomprehensibly, Vettel copied Magnussen on the following lap while Max mounted slicks. A risk that could cost him dearly. Amidst the flurry, Leclerc also changed to softs on lap 28 and Hamilton followed suit a lap after that.

In a panic, everyone had been swept away by the American team’s wrong tyre choice. The first victim from that mistake was #16 from Maranello. Leclerc crashed against the barriers on turn 16 of lap 29, triggering the second safety car.

Soon after that, Hamilton crashed on the same spot. He went back to boxes to repair his damaged front wing very much to the surprise of the mechanics on the pit who, unprepared for the job, took 50 seconds to replace it. It was Good-Bye to a triumph he had almost taken for granted.

Max leads until the end

Verstappen suddenly inherited the lead but made the mistake (again) of mounting medium slicks (yellow) on his next pit stop at the 2019 F1 German GP. That mistake cost him a 360º spin on lap 29 from which he managed to come out in control and still on the lead. 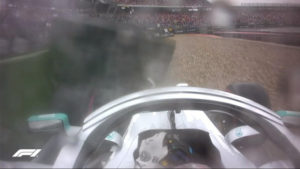 Behind Max came Hulkenberg, Bottas, Albon and Hamilton in fifth. On lap 41, however, there was fresh drama on the track as the German driver from the French team crashed against the barriers. Everyone backstage was visibly on edge.

In a wise move which was decisive for the outcome of the race, Red Bull changed Verstappen’s tyres to greens (wet medium). The Dutchman kept his leading position on his exit from boxes. Bottas and Hamilton couldn’t believe what was happening at the 2019 F1 German GP. 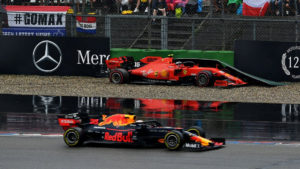 Soon after, the risky strategy adopted by Racing Point with Lance Stroll and by Toro Rosso with Daniil Kvyat paid off, as these got into the second and third position respectively. Astonishing! Hamilton, on the other hand, slipped best positions after another pit stop.

With seven laps till the end, Bottas crashed and the third safety car was out. A complete disaster for Mercedes! 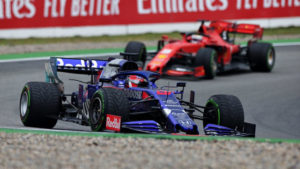 In the end, Max received the checkered flag on the lead followed by a wonderful Vettel. The German driver managed to pass Kvyat and Stroll for second in the last few kilometres.