CompetitionThe birth of the champagne spraying tradition in Motorsports

The birth of the champagne spraying tradition in Motorsports dates back to the 60s. In 1967, Dan Gurney, onboard the Ford GT that he shared with A.J. Foyt, would win the 24 Hours of Le Mans. As Gurney stood on the top of the podium, he was handed a bottle of Moët & Chandon. 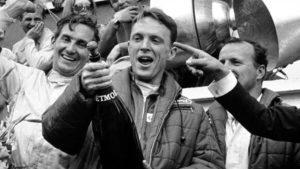 Without thinking it twice, the champion shook up the ‘trophy´ and showered everybody around him with the bubbly liquid. Gurney himself would explain in an interview, 50 years after his famous victory that he did so completely spontaneously.

Incidentally, one of the recipients of the first champagne shower was no other than Henry II (Ford), the owner of the automobile company. Ford, despite his well-known stern character, was quite amused by the whole incident. Reassured by their boss’ response, Gurney’s partner decided to join in the celebration, and a tradition was born.

A Swiss source of inspiration

Some believe that the driver got the idea of the champagne spraying tradition in Motorsports a whole year before his famous victory, after the 24 Hours of Le Mans of 1966. That year’s winner, the Swiss Jo Siffert, received the customary bottle of bubbly wine while in the podium. 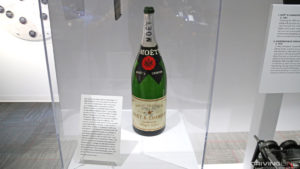 This, however, had apparently been exposed to the sun for a while beforehand causing pressure to build inside the bottle. When Siffert opened it from the podium, the frothy liquid was expelled to the outside with great force and in multiple directions. The other drivers and members of the team which were near the scene were baptized both literally and in the birth of a new tradition called champagne spraying tradition in Motorsports. 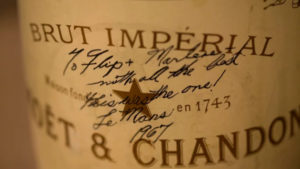 Although Gurney would go into posterity for this off-track anecdote, champagne spraying tradition in Motorsports, he was famous for his extraordinary sporting career. The New Yorker competed in Formula 1 between 1959 and 1970, taking the start in 86 Grands Prix. He achieved 4 victories (France 1962 and 1964, Mexico 1964, and Belgium 1967), as well as 3 poles, 6 fastest laps and 19 podiums. 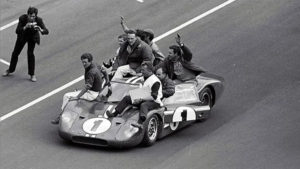 He came fourth in the World Championship in two occasions, in 1961 and 1965 and throughout his career he competed for the Brabham, Porsche, BRM, Ferrari, McLaren and Eagle teams (own team). After his victory at the 1967 Belgian Grand Prix at the Circuit de Spa-Francorchamps, on board his very own Eagle MK1 (T1G), he became the first and only American to win with a car entirely designed and built by the driver himself.

Gurney was a very versatile driver and he collected many successes away from the Formula 1. He finished second at the Indianapolis 500 in 1968 and 1969, and third in 1970. He also got seven victories and 16 podiums in the USAC National Championship, ranking fourth in the standings in 1969. On top of that, he took part in 16 races of the NASCAR Cup Series, winning five of them.

After retiring in 1970, the ‘father’ of Champagne spraying tradition in Motorsports created a team called All American Racers on the other side of the Atlantic, which he managed until 2011, year in which his son Justin took over. 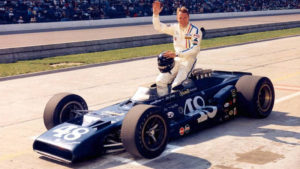 Almost from the start, the All American Races became one of the biggest American teams, winning such emblematic events as the 500 Miles of Indianapolis, the 24 Hours of Daytona or the 12 Hours of Sebring.

The all-around champion also stood out in the field of engineering. His greatest contribution being the invention of the so-called Gurney flap, a small tab located on the top of the ailerons of Formula 1 cars which improves their downforce.

This post is dedicated to the memory of its protagonist, Dan Gurney, who died on January 14, 2018 at 86 years as a result of pneumonia.