Ferrari’s Prancing Horse is one of the most universally recognisable icons of Formula 1 and of the world of Motorsports.

An enduring symbol representing the most successful team in history, whose fame and legend transcend borders. Synonymous with success, competitiveness and tradition, it remains one of the best-known logos in the world.

But, do you know the origin of Ferrari’s famous horse? Well, there are two theories in this regard, both going back to the beginning of the 20th century and to the life of Italian aristocrat and aviator, Count Francesco Baracca. He was a national hero who joined the air forces of his country during the First World War.

According to one of the theses about Ferrari’s Prancing Horse, Baracca had painted the family coat of arms on the sides of his biplane as a token of good luck. The coat of arms depicted the figure of a prancing horse, standing on its two hind legs and with the front ones extended upwards. 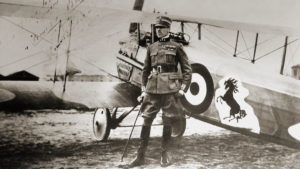 He became a very successful fighter pilot killing over thirty enemies and his badge became synonymous with victory and good luck among his countrymen.

Other research suggests that Count Francesco would have taken the emblem of the first enemy plane he hit to the ground, which was that of the city of Stuttgart. Baracca died on June the 19th, 1918, in combat, shortly before the end of the conflict.

Five years later, on June the 17th, 1923, Enzo Ferrari won a car race at the Ravenna Circuit in northern Italy. Fate had it that after the victory, Ferrari got invited to the home of Countess Paolina Baracca, Francesco’s mother. 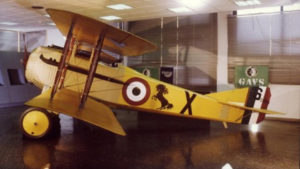 In her house, Enzo noticed a piece of cloth that presided over the room. It was part of the material used to cover the fuselage of her son’s plane during the military conflict and it contained the coat of arms of the family: the Prancing Horse.

Other sources argue that the Countess and Ferrari met at the Ravenna circuit itself. In any case, the lady asked Il Commendatore to wear that symbol on its racing cars and the then young driver accepted the proposal of the grieving lady. He was agree with the Ferrari’s Prancing Horse, but… 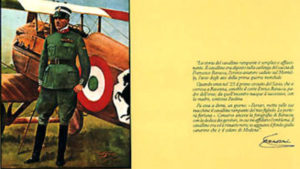 Enzo then introduced some changes to the original design. Initially, the Ferrari´s Prancing Horse was painted red and stood over a white cloud. Enzo painted it black as a sign of mourning for the perished aviator. 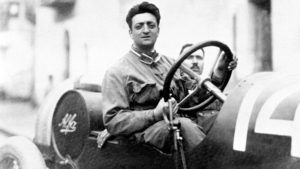 He also made the background yellow, a colour representative of his hometown of Modena. Finally, he redrew the tail of the animal so as to make it point upwards instead of downwards, as it did in the original design.

Ferrari’s Prancing Horse logo, however, did not emblazon the red bullets straight away. History would have to wait until July the 9th, 1932 at the 24 Hours of Spa–Francorchamps to see the Prancing Horse on display for the first time. 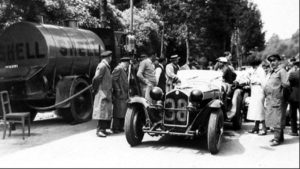 The Ferrari’s Prancing Horse logo was on the body of the Alfa Romeo 8C 2.300MM #38, belonging to Enzo´s La Scuderia. From then on, the famous horse became the symbol of Ferrari. Incidentally, the surname Baracca, written with a “K” instead of a “C”, means good luck in the Muslim world. It has certainly brought good luck to Ferrari. 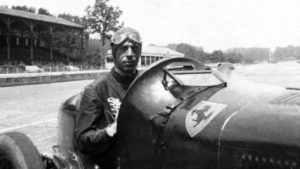 The Formula 1 team became the most successful in history, after winning 16 Constructor Titles and 15 Driver titles, as well as accruing 235 Grand Prix victories. At present, Maranello´s squad still holds that honour and you can see the Ferrari’s Prancing Horse ‘on track’.