7 7 Apr, 2019
mercedes, Silver arrows Mercedes, Mercedes Motorsport
The story behind the silver colour of Mercedes’ racing cars dates back to the 1930s. At that time, the Formula 1 still didn’t exist (the first such championship was in 1950) but there were already races called Grand Prix.
In those times there were hardly any regulations regarding the characteristics of the cars. The manufacturers and drivers shared the same nationality and represented their countries in a kind of Championship of Nations.

The speed and power get out of control

The lack of regulations meant pretty much everything was allowed bringing together very disparate vehicles. Manufacturers created extremely heavy cars, of over two tons in some cases, which easily reached 250 km / h.
The fever for the enormous speed and power had no limits. Obviously, this deadly cocktail meant accident rates shoot up uncontrollably. The International Sports Car Commission met on October the 12th of 1932 in Paris, in order to put an end to this deadly trend.
They agreed to the implementation of technical limitations to the cars including the restriction of the vehicle’s maximum weight to 750 kilos by 1934.

The dark times are left behind

The new regulations put an end to that era of anarchy where the car’s enormous power and weight had turned them into killing machines. It was goodbye to the 2,300hp and 900k Alfa Romeo or to the 4,900hp Bugatti and to the 7,000hp and 1,500k Mercedes SSKL.
The latter had dominated during the 20s and early 30s but the new regulations meant it was now out of the game. The German manufacturers, however, reacted quickly and with determination in the face of the new developments, and created a sensational machine: The W25. 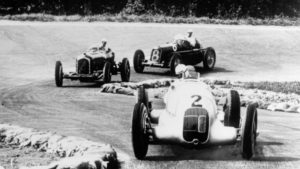 The rivalry was fierce between both German brands. The parent company of the current Audi, however, wasted no time with their vehicle development and on March the 6th 1934, caught their opponents at Mercedes off guard. Hans Hoachim Stuck, riding an Auto Union broke the standing record at the Avus Circuit in Berlin. The battle between the manufacturers was served. 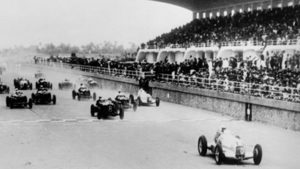 Only a month and a half after that feat, it was payback time for Mercedes which pulverized the record at the Berlin track. Their stunt was even more remarkable considering their driver, Rudolph Caracciola, had a leg injury. 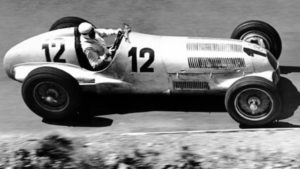 In this context, the moment of truth of that year arrived. On June the 3rd 1934, the official season began with the International Race of the German Automobile Club at Eifel. The competition, also known as the Eifelrnnen Grand Prix, ran on the slopes of the Eifel mountain, at the Nürburgring.
Mercedes, however, started literally on the wrong foot as their star driver, Caracciola, had to resign due to the state of his injured leg. But there was still more bad news to come…

Then, an enemy arose which they were not expecting and for whom there was no plan B: the scales. During the pre-test checks, the Mercedes W25 of Manfred von Brauchitsch weighted in at 751 kilos, one more than the limit allowed by the new regulations.
In practical terms, this meant that if the irregularity was not resolved, the W25s would be disqualified. The team’s director, Alfred Neubauer, was aware that they lacked the material time to lighten up their car by 1,000 grams. Moreover, the cars were built as a holistic mechanism in which all the elements were essential.

The solution which gave origin to the Silver Arrows

Then Neubauer had a genius idea. He realised that there was indeed one thing that their car could do without: Its metallic white paint. The night before the race, the mechanics completely stripped down the body of the vehicle to reveal its silver metal. 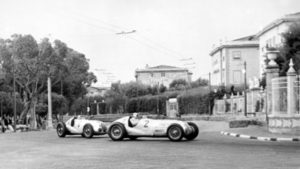 It weighed in at exactly 750 kilos and was finally included in the list of participants. The new look proved to bring about some excellent luck as Manfred von Brauchitsch took the victory ahead of his Auto Union rival, Hans Stuck.
It was the first victory in a success story that continues to our days, and the birth of the legendary Silver Arrows.
‘Mercedes silver colour’ Images: Mercedes & Wikipedia.