15 15 Jul, 2019
ferrari, mclaren, carlos sainz, 2019 F1 British GP
Mercedes‘ driver Lewis Hamilton has conquered his seventh win of the year this Sunday at the 2019 F1 British GP in Silverstone, becoming at the same time the F1 driver with the most victories in the UK. His teammate Valtteri Bottas was second sealing yet another 1-2 for Mercedes.

Third place was for Ferrari’s Charles Leclerc who crossed the finish line just ahead of Red Bull’s Pierre Gasly who was fastest than his teammate and head of ranks Verstappen, fifth. That fourth place is the Frenchman’s best result of the season. 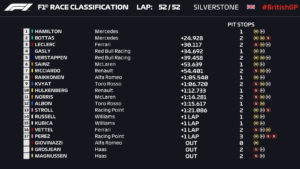 In another great performance, Carlos Sainz has taken the sixth position after climbing seven places and fending off Daniel Riccardo over the last laps. Kimi Raikkonen‘s Alfa Romeo and both the Toro Rosso of Daniil Kvyat and Renault of Nico Hulkenberg have completed the top ten, in that order.

Sebastian Vettel made another of his clumsy mistakes after running into the back of the Dutchman’s RB15 and finished in the thirteenth position with a sanction.

Hamilton started making attempts to rob his teammates’ Valtteri Bottas of his first position as soon as the lights were off but the Finn was determined to not let it go.The Briton overtaked Bottas but the Finn passed him again. 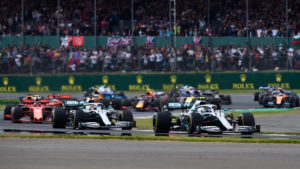 A few metres behind, Leclerc and Verstappen kept their third and fourth starting places respectively while Vettel took fifth after passing Gasly. In the midfield, Sainz was off to a great start again quickly climbing from the thirteenth to the eleventh position.

Civil war for the lead at Mercedes

The two Silver Arrows engaged on merciless combat for the lead right from the beginning. The national hero was relentlessly attacking his Scandinavian prey but the Finn was able to contain the offensive. 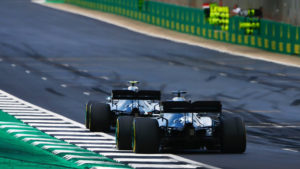 There was only one thing on Hamilton’s mind: To take his sixth win at Silverstone and beat Jim Clark and Alain Prost for the title of F1 driver with the most wins in the UK.

The distance between them was less than a second. After fighting for the first twelve laps, both gladiators gave each other a break.

Max vs Leclerc: A fight between two future champions

Behind both the Mercedes another great battle was unfolding in Silverstone. On the twelfth lap, Verstappen was hot on the heels of Leclerc, and everybody knows what happens when the fierce Dutch driver smells the blood.

On lap fourteen the Prancing Horse #16 and the Red Bull #33 went to pits at the same time. The game of chess had moved from the track to the garage. Both cars came out of the pit lane in parallel.

The Dutchman got ahead by a mere few millimetres for a few metres but then Leclerc recovered his fourth position thanks to a minor mistake by Verstappen. The ensuing laps became a classic Formula 1 duel with the Monegasque driver blocking every gap before his attacker. Pure competition.

Six laps later, with the Ferrari and the Red Bull still engaged in their battle for fifth, drama struck. The Alfa Romeo of Antonio Giovinazzi went off track triggering a safety car.  As a result, Lewis Hamilton went to pits on lap 21 to bolt-on hard tires and Vettel, Verstappen and Sainz followed suit.

Bottas, however, was kept out on the track and with that move went every chance he could have had of a win. The safety car left the track on the thirteenth lap leaving Hamilton at the lead of the British GP 2019 followed by Bottas and Vettel. Further down were the Red Bulls of Gasly and Verstappen followed by Leclerc in the sixth position.

With what happened in Spielberg still fresh in the Monegasque driver’s mind, he went on the ultimate hunt for Mad Max, finally passing him on lap 24. There was some thrilling wheel to wheel moments with both cars actually brushing against each other at some point.

n the end, it was payback time for Charles, who overtook Max just as it happened in Austria, roles reversed but the Dutchman soon returned the blow with an epic manoeuvre.

Near the 30-lap mark, Verstappen passed teammate Gasly for fourth. Now only Vettel separated him from a podium position but on lap 38 the German succumbed to the attack of the Dutch predator.

Vettel was eager to take his place back and, in his desperation, he ended up crashing into the back of the #33. Despite being sent off-track by the strong impact, both cars rolled back on, to continue the race. The #5 from Maranello, however, had to pass through boxes to replace a broken front wing.

Max continued racing as normal and Leclerc inherited the third position as a result of his teammates’ mistake. Sainz and Ricciardo were also engaged in their own raging fight for the sixth position with the Australian driver glued to the back of the Spaniard for a chance to make a pass on him. A chance that never came.

Lewis Hamilton received the checkered flag as the victor (80th win)  before an exhilarated crowd. Bottas was second for yet another 1-2 for Mercedes. Leclerc kept the third position.

Gasly, ahead of his teammate Verstappen, arrived one place short of the podium, in what has been his best performance of the season. Carlos Sainz got a magnificent sixth place after performing another of his memorable comebacks and leaving Raikkonen and Toro Rosso of Daniil Kvyat behind.