2 2 Sep, 2019
F1 2019 Belgian Grand Prix
Ferrari’s Charles Leclerc has conquered his first Formula One victory this Sunday at the F1 2019 Belgian Grand Prix, thus breaking the Scuderia’s 15- race winless streak from 2018 F1 USA GP. Lewis Hamilton, whose Mercedes was hot on the heels of the Monegasque driver in the last few laps, and Valtteri Bottas, completed the podium.
Sebastian Vettel could only manage fourth unable as he was to set a constant rhythm and after being let down by the performance of his tires. From eighteenth to fifth came an extraordinary Alex Albon on his maiden race with Red Bull. 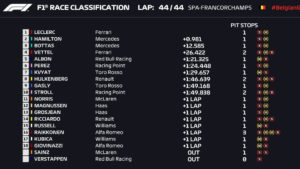 An unreliable McLaren was the great disappointment on the day with both its car having to withdraw from the race. Carlos Sainz started having power issues at the formation lap and had to retire on the first lap.

Lando Norris would follow suit in the last one. The Briton put up a great performance and was in the fifth position when his MCL34 decided it had had enough. 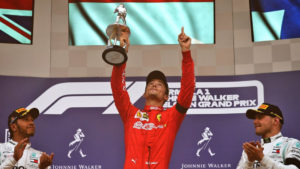 The winners’ champagne in Wallonia, however, had a bitter taste this Sunday and the victors couldn’t enjoy their success as they would normally do.

The day was marked by the tragic death of 22-year old Formula 2 driver, Anthoine Hubert, the day before. He lost his life chasing his dream. Moreover, the French driver was a friend of the Monegasque.

Leclerc kept the first place as the lights went out but his teammate Vettel lost his second starting position to Lewis Hamilton. When the bulk of cars reached the first corner, Kimi Raikkonen closed the way to Max Verstappen, and both cars touched as a result.

The Dutchman’s front wing was battered and he lost control in the Raidillon area. It was the end of the race for Verstappen who ended up crashing against the protections and triggering a safety car.

An outstanding Lando Norris had made the most of the many battles going on at the start to climb up to the fifth position. Meanwhile, Leclerc continued leading the race followed by Vettel, Hamilton and Bottas.

The safety car left the track on lap 5 and immediately after Ferrari’s Little Prince started imposing his rule. Fast lap after fast lap, he opened up three whole seconds with teammate Vettel. Behind the Red Bullets both the Silver Arrows were at the chase.

The SF90 is well known for being very demanding on the tires and by lap 15, Vettel could not stretch the life of his compounds any longer and had to go to pits.

None of his enemies, however, replicated the move and the German driver’s chances of success went out of the window. He rejoined the track in fifth position.

Hamilton inherited Vettel’s second place becoming the only real threat to the young Maranello driver. Despite the Briton’s savage rhythm, Leclerc managed to keep him at bay and maintain his huge four-second advantage.

An emotional tribute to Hubert

Just four laps after that, on the 19th, the public at the Spa track stood up and started clapping. It was a spontaneous tribute to the French driver who had lost his life the day before at the very same circuit.

Hubert was Renault’s protege and part of their junior driver programme and was a promising young talent to destined to do big things in F1 one day. He always raced with the number 19. The emotional homage touched the hearts of the millions of members of the Motorsports family across the world.

Very much unaware of what was happening at the stands, the F1 gladiators continued their quest for success. The midway point was fast approaching and with it would come one of the key moments of the race.

Leclerc, Hamilton and Bottas pitted between laps 22 and 24. Always displaying a more consistent rhythm than Vettel, Leclerc passed his teammate on lap 27, regaining the lead of the Belgian Grand Prix. The Ferraris couldn’t waste any time as Hamilton was fast approaching from behind.

The German driver and four-time world champion, in a very generous display of teamwork, and aware that his winning chances had gone, took to the task of blocking Hamilton. He did so during five laps, enough time for Leclerc to escape with a decisive advantage. 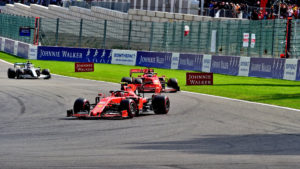 The Mercedes #44, desperate behind Vettel,  was finally able to pass him on lap 32, but it was too late. He had wasted five laps and his chances of success had evaporated. Leclerc escaped to the finish line with a 5,376-second advantage.

Suspense until the very end

The excitement continued right until the final laps of the 2019 F1 Belgian Grand Prix. Leclerc’s tires started to wear off and Hamilton could smell the blood. With less than five laps remaining until the checkered flag, the distance between them had been shrunk to 2.7 seconds.

The champion form Stevenage could see the red spot getting bigger in the horizon. By the final lap, there was less than a second between the two. 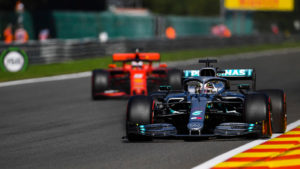 In the end, and despite the intense pressure from Hamilton, the same luck that would deny Leclerc a victory in Bahrein and Austria, was on his side at the 2019 F1 Belgian Grand Prix. Hamilton and Bottas took second and third place.

Vettel’s performance, unfortunately, was lacking once again but he was outstanding in his role as a team player helping both Leclerc and Ferrari. He finished in the fourth position and 26 seconds behind the winner.