Toyota and Ott Tänak have met all expectations after winning the Rally Finland 2019 and ninth appointment of the 2019 WRC Calendar, with great authority.

This is the second consecutive victory for the Estonian in Finland, who has arrived  25.6 seconds ahead of second Esapekka Lappi (Citroen). Tänak’s Scandinavian teammate, Jari-Matti Latvala, has closed the podium.

A sensational result for the Japanese team, that repeats its victory of twelve months ago on the same stage. Tänak has perfectly managed his Sunday advantage by setting a consistent pace and mastering the situation from beginning to end. 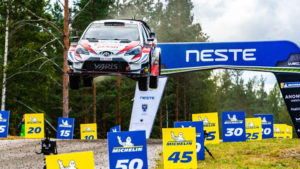 The Estonian even managed to increase his advantage by a few seconds against his enemies on the decisive day.

His fourth victory of the season (together with Sweden, Chile and Portugal) and tenth in the speciality, has served Hyundai’s head of ranks expand his leadership of the standings.

Tänak is at the moment one of the strongest candidates to claim the Championship title. His consistent speed, his great state of form and his three triumphs over the last four races reinforce his chances.

This has been a fantastic way to start the second and decisive part of the competition after the summer holidays for the driver from Kärla. He has also made up for the disappointment of Sardinia where glory escaped him in the final stretch.

Hyundai, on the other hand, has been the great defeated at the Rally Finland 2019. Mikkelsen was fourth and Thierry Neuville sixth, whose fight for the World title moves further and further away. His enemy from Citroen, Sebastien Ogier, hasn’t fared much better. The French six-time champion has only managed a fifth position.

As expected, Tänak was swift to attack on Saturday. The eight timed sections became a battlefield from which the leader of the Alzenau team emerged victoriously.

As soon as the day beganat the Rally Finland 2019, he took the lead from his partner Latvala. In addition, the Scandinavian from Toyota hit a stone which resulted in his Yaris WRC suffering a flat tire he lost more ground to his teammate and new rally leader.

Another member of the South Korean team, Kris Meeke, also suffered an incident for which he had to retire. Little by little, Tänak began clearing the ground behind him.

The distanced with his rivals for the crown is also getting larger and larger. The title winner for in the last six years, the Frenchman Sëbastien Ogier, was in fifth positions and 53.1 seconds behind. The Belgian, Neuville, remained seventh, at 1: 19.3 minutes from the Estonian.

Friday: Toyota goes on the attack

On the second day of the competition, the Japanese team took command of the race by getting into the first three places. Latvala stealing the position from the Hyundai driver after the seventh stretch.

Tänak took the second position very close from his rebel squire, while the Briton Kris Meeke,  guarded their backs, from the Citroën of local hero, Esapekka Lappi.

Below, another two of the great Championship favourites, Sébastien Ogier and Thierry Neuville, followed in the seventh and eighth positions respectively, after losing 13.6 seconds and 29.6 seconds each. They did, however, managed to cut back most of that distance as the day progressed.

By the end of the day, Latvala was still at the lead but with a slim advantage over his stubborn teammate Meeke. Lappi was third with a 2.4-second advantage over Tänak at the Rally Finland 2019.

The Estonian driver, at just 2.6 seconds from the head, was in a privileged position to control his opponents. He was already planning a ruthless attack for the following day.

Breen, on the other hand, was being left behind at 14.2 seconds from the magic quartet. At this point in the battle, no one doubted that Toyota’s team was sharpening its claws for the next day. And so they did.

After the summer break, Tänak started the competition very strongly and sending a very clear message to his opponents. In the first Thursday special held in Harju, he ended at just 0.7 seconds from the best, the I20 Coupé WRC of Thierry Neuville.