Thrilling ending at the eighth appointment of the WRC calendar, Rally Italy-Sardinia, with Spaniard Dani Sordo stealing the victory from Ott Tänak at the last Special.

Sordo’s first victory since 2013 came about after the Yaris belonging to the Estonian driver, who was leading the race to that point, started having suffered some mechanical issues. Tänak, who had dominated the Italian Rally from the start, lost two minutes and had to settle for fifth place. 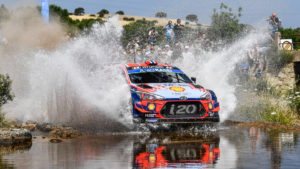 Teemu Suninen‘ outstanding performance got him to second at 13,7 seconds from Sordo, the third podium of the season for his team Ford M-Sports. The Hyundai of Andreas Mikkelsen closed the podium 32,6 seconds behind the champion.

Incidentally, Thierry Neuville, the head of ranks from the Alzenau team has been the only one to disappoint. The until now third in the standings has not been able to celebrate his 31st birthday today with a good result at the Rally Italy-Sardinia 2019.

His poor performance and mediocre sixth place have cast him away from the podium and pushed him further back in the championship classification. This is his third consecutive winless race in the year.

All the forecasts that pointed to the driver from Kärla’s third successive win after Chile and Portugal had gone out of the window in the most unexpected of ways. 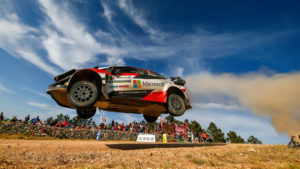 If it hadn’t been for that fateful steering problem, he would have taken an authoritative win. Dani Sordo’s performance has nonetheless been extraordinary.

On Friday he managed to get to the head of the race after Sebastion Ogier crashed against a stone.Despite being overhauled by Tänak on Saturday, he kept hot on his heels right until the chequered flag. Well done, Dani at the Rally Italy-Sardinia 2019 !

After overthrowing Sordo from the lead on Saturday, Tänak and Toyota started Sunday with a 25,9-second advantage over the Spaniard. Even the determination of the Hyundai driver could do nothing against such gap coupled with the strong pace that Ott Tänak was setting at the front. Then came the Power Stage at the Rally Italy-Sardinia 2019.

The Estonian champion had been able to keep his advantage intact thanks to an extraordinary combination of speed and consistency. It seemed that the only fight was now for the second and third steps of the podium.

Sordo had started the last stage of the Italian Rally a whole 17 seconds ahead of Teemu Suninen. The Finn from Ford M-Sport was in great spirits and determined to take third for his team. The grinding stages and blazing sun would be the backdrop of a fight to the death. 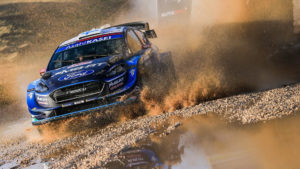 All eyes were on the upcoming showdown between the Spaniard and the Finn. The perseverance and courage of the former, however, yield him a prize a lot bigger than anyone expected. In the last few meters, the Tänak’s Yaris suffered a problem with his steering and the glory was handed down to Sordo on a silver platter at the Rally Italy-Sardinia 2019.

Sordo hands the leadership over to Tänak on Saturday

Dani Sordo headed into Saturday, the longest day of the Rally Italy, with the difficult task of defending his 11,5-second advantage over the Estonian tornado. By the third stage of the day, he knew that he was fighting for a lost cause.

In the blink of an eye, Tänak had not only caught up with the Spaniard but built up his own 6,3-second gap, which he progressively increased as the day went by. An outstanding Suninen had also managed to sneak in behind the two leaders.

The brilliant Scandinavian was fixated on Sordo’s second position. Meanwhile, Ogier, who had re-joined the race after his accident on Friday, damaged the rear left suspension of his C3 WRC.

Sebastien Ogier had dominated the Rally Italy-Sardinia 2019 until he clipped a boulder on Friday’s special and had to bid goodbye to all podium chances. It was then that Sordo took the lead of Rally Italy before the Estonian from Toyota but it was apparent that his advantage wouldn’t be big enough to stop the almighty Ott Tänak.