Ferrari ’s Sebastian Vettel has returned to the winning path after taking the 2019 F1 Singapore GP this Sunday, ahead of teammate Charles Leclerc and Max Verstappen (Red Bull).

Behind the Ferraris came in both the Mercedes of Lewis Hamilton and Valtteri Bottas after a disappointing performance which has deprived them of tasting the champagne this time after doing so for many consecutive races.

Carlos Sainz has finished twelfth after being penalised for touching Nico Hulkenberg on the first lap. The other driver from McLaren, Lando Norris, has finished in seventh place, just behind Alex Albon.

The German driver has silenced his many critics for now after this 53rd fresh victory in F1; 392 days and 22 races after his latest win in Belgium in 2018. All in all, a great day for the Italian team which has managed to win in the most adverse circuit for their SF90, and achieved its first 1-2 since Hungary 2017.

The right strategy coupled with some key updates on the red missile (New front and back wings, floor and diffuser) have worked the miracle: Beating title rival Mercedes in a track which was in theory best suited for the silver arrows.

The Scuderia has finally dealt a blow to Mercedes, sending a very clear message that they shouldn’t take their leadership for granted. It has been the German team this time that has made all the wrong decisions. A somehow disappointing result as well for the young Monegasque, who lost the lead to his teammate as this tried to fend off Hamilton with a strategic pit stop.

The start: The leaders hold on to their positions

Emotions were running high at the Asian circuit right from the moment the lights signalled the start of the race. A good start from Leclerc who defended his pole from Lewis Hamilton. Sebastian Vettel also performed a perfect start in his third position ahead of Verstappen who was starting in fourth.

A thousand battles were getting underway both in the middle and back of the grid. In one of those, Sainz attempted to overtake Albon at the very same time that Hulkenberg tried to make a pass at him. The Renault crashed with the McLaren as a result. It was farewell to the points for the #55 from Woking. 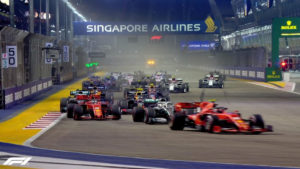 Back at the lead, and a few laps later, the #5 from Maranello opened some ground (between 1 and 1,3 seconds) with the Mercedes #44. Soon after, however, the Monegasque lowered the rhythm hoping to save his tires in order to launch an attack just ahead of his pit stop, planned for lap 20.

Keeping a very low pace (7 tens of a second slower than Russell’s Williams) would also, in theory, prevent Hamilton from undercutting him. As a result, the group at the head, including with Verstappen and Bottas, got increasingly close together.

Closely following the script, the Monegasque accelerated on lap 16, completing the following lap 8 tenths of a second faster than the one before. The guns were out and Hamilton, Sebastian Vettel, Max and Bottas didn’t shy away from the fight.

The winning, but controversial, pit stop

The crucial moment of the Singapore Grand Prix arrived on the 20th lap. Despite being third behind Leclerc and Hamilton, Vettel pushed his pit stop forward, a logical move, in theory, aimed at defending himself from being undercut by the Briton. Verstappen replicated the move immediately. A lap later it was Leclerc’s turn.

The driver from Happenheim used that precious unobstructed time to perform a sensational lap that took him to the head of the race. Unexpectedly, his teammate rejoined the track in second place. General disbelief as he let the lead slip away in favour of the #5 from Maranello.

From that moment on both Ferraris were flying away towards their unexpected triumph. Hamilton, aware of the situation, put off his pit stop until lap 27, in search of an impossible overcut. Four laps after that, the Briton witnessed how Vettel consolidated his first position as he passed Giovinazzi, who was yet to go to pits.

On lap 31, the German champion sealed his much-needed triumph. One of his greatest assets was his ability to leave inferior rivals with different strategies behind. Leclerc, on the other hand, lost his lead in those very same manoeuvres. There was still half a race ahead as well as three safety cars still to come but things wouldn’t change.

This victory came to Vettel just at a time when the critics against him were intensifying and so it has served to release the increasing pressure he must have been under. Leclerc represents the other side of the coin. He did not set up the pace as he was not made aware of his teammate’s move. The fastest man on the weekend thus had to settle for second best. Verstappen, for his part, did not do as best as it was expected of him and could only manage third with his Red Bull.

After the Dutchman, came in both the Mercedes of Hamilton and Bottas in a dark day for the German scuderia. An unlucky Sainz had to settle for twelfth.