29 29 Sep, 2019
2019 F1 Russian GP
Lewis Hamilton has led Mercedes’ 1-2 at the Russian GP this Sunday in the Sochi Autodrome. His teammate Valtteri Bottas played a crucial role in his success by stopping the Ferrari of Charles Leclerc during the final laps.

The Red Bulls of Max Verstappen and Alex Albon came in right behind the podium holders followed by a very combative Carlos Sainz, who finished sixth and his team mate, Lando Norris, eighth.

The driver from Madrid put out a sensational performance, returning to the points after three consecutive appointments ( Belgian GP, Italian GP & Singapore GP without scoring.

The Silver Arrows have thus broken Ferrari’s three-consecutive winning streak, the only winners so far after the holiday break. Just when it seemed that another 1-2 for Maranello was a done deal, a virtual safety car, incidentally caused by Vettel’s SF90 breaking down, helped the Briton form the Brackley team snatched the first position. The young Monegasque had to bid farewell to his dreams of success.

Despite a later accident involving George Russell triggered the intervention of another safety car, the #16 from Maranello could not pass the Mercedes #77, whom, in a great team effort, allowed Hamilton to escape. 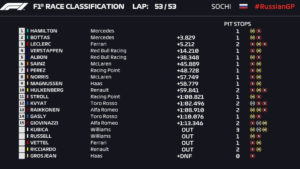 This is the 82nd F1 victory and the ninth this season for the Briton, who has further increased his lead at the head of the standings. All in all, an unexpected and controversial outcome for La Scuderia with Vettel breaching team orders to let Charles pass him during the first laps of the race.

Vettel is off to a great start

Vettel performed an extraordinary start passing both Leclerc and Hamilton for the lead in a strategic move which had been plotted by the team beforehand.

Another breath-taking start also for Sainz who first took on Bottas and later managed to get side by side with the British five-time-champion in the third position.

Meanwhile, Ferrari’s German driver started opening ground with the rest and setting one fast lap after another, thanks to a relentless and merciless rhythm. By lap number six he was 1,328 seconds ahead of Leclerc.

Ferrari’s strategy goes out of the window

It wasn’t long before the disagreements broke out within the Ferrari team. The radios of the two red pilots were red hot with Vettel refusing to let Charles overtake him as he had supposedly agreed before the race.

The driver form Heppenheim was arguing that in order to not waste time, the Monegasque had to come closer. Leclerc, for his part, contended that if he attempted to get any closer, he would run the risk of destroying his tires.

In the midst of the argument, it became increasingly apparent that the real problem lay in which of the red cars was to be on the lead.

Once it was clear that Vettel had no intention to comply with the team orders, Ferrari decided for Leclerc to attempt and undercut his teammate and, to that effect, he entered pits on lap 23 to mount medium tires, returning to the track ahead of Vettel.

Vettel breaks down and Hamilton takes the lead

Considering the leading position of the two Ferraris, which were setting the pace at the top, Mercedes decided to play a different card. They asked Hamilton, who was then third, to lengthen his pit stop and continue with his medium tires in an attempt to undercut the reds. In the end, the strategy paid off.

Vettel changed his tires during lap 26 and only two laps after that he broke down with an energy recovery problem. A virtual safety car was then called out which Mercedes used to put Hamilton in the pits. A completely unexpected turn of events which handed the lead to Hamilton on a silver platter.

Moments later, another twist of fate would bring yet another safety car to the track and, from then onwards, the German cars stole the whole show.

Bottas was bravely containing Leclerc from the second position. Hamilton, taking full advantage of the wall that his Finnish partner had erected between him and the Monegasque threat, escaped ahead to an unsuspected victory. 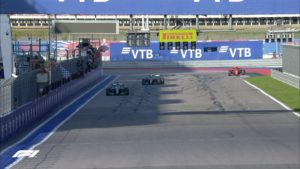 The driver from Nastola finished second ahead of a dismayed Charles Leclerc. The young driver had let the victory slip away from his fingers.

Unfortunately for him, both the combination of  Vettel’s refusal to comply with team orders and an untimely virtual safety car, denied him of the victory despite having been the fastest throughout the weekend.

Verstappen crossed the finish line in the fourth position up from his ninth starting place. Two places below came in Sainz. An extraordinary result for the Spaniard who was surpassed by Albon, fifth from pit lane, during the final stages of the competition. The other McLaren car of Lando Norris, was eighth.