This sunday takes place the 2018 Formula 1 United States Grand Prix and eighteenth race of the season at the Circuit of the Americas (COTA) in Austin, Texas. This would also be Lewis Hamilton first chance to clinch is fifth F1 World Champion Title.

On the other hand, Ferrari will attempt to stop, or at least delay, the Briton with an (unlikely) victory of Sebastien Vettel. The boys from Red Bull (Daniel Ricciardo and Max Verstappen) will hope to steal a podium position from the Germans or the Italians. Renault and Haas on their part will continue the fight to become the best of the “B class”.

As far as the Spaniards go, Fernando Alonso will continue to struggle on board his McLaren and his friend Carlos Sainz will strive to get a point or two at the 2018 Formula 1 United States Grand Prix.

Hamilton, just 8 points away from Fagio

An ecstatic Hamilton arrives in Austin, one of his favourite circuits, having won the last four consecutive GPs (Italy, Singapore, Russia and Japan) and six out of the seven races disputed after the summer break.

The very focused and inspired man from Stevenage has 331 points in the standings, 67 more than main rival Sebastien Vettel, meaning he just needs to add on 8 points more than Ferrari’s German driver to be champion once again. With his solid advantage, it is therefore very likely for Hamilton to seal his fifth title in Texas.

The odds arriving at the 2018 Formula 1 United States Grand Prix could not be better for Lewis. Ever since the Texan track entered the F1 circuit in 2012, the Briton has claimed victory there at five of the six editions, including the last four. The only exception was 2013 when Sebastien Vettel took the win with his unstoppable Red Bull RB09.

As if this wasn’t enough, the Mercedes #44 also won his third World Title at the USA GP in 2015. There is no doubt that COTA is Hamilton’s territory.

And it is not only the numbers and Hamilton’s excellent form that weight the odds in his favour to win the 2018 Formula 1 United States Grand Prix, but also the ever-greater performance of his Mercedes.

The improved Mercedes W09 has not only caught up with the once superior Ferrari but has gone beyond it as far as capabilities are concerned.

His team-mate Valtteri Bottas is also contributing to his success thanks to his selfless team-work ethos, to the point of sacrificing his own victory when required by the circumstances.

The Finnish form Mercedes himself will be competing with fellow countryman Kimi Raikkonen (Ferrari) for the third place in the Drivers’ Championship.

The Italian Scuderia has arrived in Austin with the only goal of stopping Hamilton in his quest for the fifth title or at least delaying it until Mexico. The tension and pessimism that reigns within the Maranello team, however, makes a hypothetical victory of Sebastian Vettel very unlikely. His latest triumph of the season was back at the end of July at the Belgium Grand Prix, five races ago. 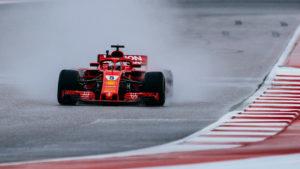 Lower down in the pecking order, Red Bull will try to conquer one of the top positions once again, in the 2018 Formula 1 United States Grand Prix. The team from the energy drinks will be ready to take advantage of any mishap by the Italian or German leaders to step up to the podium for the tenth time in the season. Verstappen and Ricciardo want to be up there popping the champagne.

Renault and Hass, leaders of what has come to be known as the “B class”, will fight their own battle for the fourth position at the Constructors’ championship ahead of McLaren and Racing Point Force India.

Last but not least, there is the fierce combat for the seventh position at the Drivers’ Championship, which appoints the best driver besides those of the three reigning teams: Mercedes, Ferrari and Red Bull.

There are mixed feelings regarding the fate of the Spaniards at the 2018 Formula 1 United States Grand Prix. After finishing second at the 6 Hours of Fuji for the World Endurance Championship (WEC), Fernando Alonso returns to his Formula 1 ordeal.

His poor performing and stagnant McLaren prevents the Spaniard from aspiring to any significant result. Finishing within the first 10 positions – something he hasn’t managed on the last two races – seems like mission impossible…as long as it doesn’t rain. But with Alonso behind the wheel (almost) everything is possible.

His compatriot Carlos Sainz, on the other hand, stands a real chance of getting some points. The driver from Madrid will not waste any chance to advance in the standings despite the obvious sluggishness of his Renault. At the last Grand Prix in Japan, he managed a well-deserved and hard-fought point. He might not be able to repeat his seventh position at Austin from last year, but he might be able to score a few valuable points.