Another victory and another title. With still one race left to wrap up the season at the end of September, Toni Bou is already this year’s TrialGP World Champion for the thirteenth ! time in a row after winning -and spraying champagne– this Sunday in France.

The pilot from Barcelona has dominated the season throughout having won all of the races in the Championship. This Sunday at the French GP he managed his sixth consecutive win. The race took place at the Alpine resort of Auron and the also Spaniards Jaime Busto (Vértigo) and forever rival Adam Raga (TRRS), Toni Bou´s biggest enemy, completed the podium.

After this victory, the driver from Montesa Repsol has drawn his number of outdoor titles level with his indoor one for a grand total of 26 crowns in World Trial Championships. The Catalan pilot’s extraordinary and unparalleled achievements have already made him into a legend of the sport. 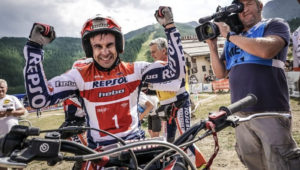 The hero of the feat, happy with his new victory, had the following to say to the press: “It has been a short but very intense World Championship; we have matured a lot this season but now it is time to enjoy the holidays”.

Meanwhile, team manager Miquel Cicera has said of his protégé: “As we always say, (Bou) is an animal”.  From his team Honda they have wanted to commemorate their drivers’ feat by printing the slogan: “This is not a miracle, it’s a legend” across commemorative t-shirts.

Toni Bou dominated from the first lap despite receiving 8 penalty points across its 15 zones. Busto and Fujinami got 13 each. On the second pass, it was more of the same. In the end, the Spaniard sealed a fantastic performance with just nine penalty points in total while Busto and Raga ended up with 23 and 25 points respectively. 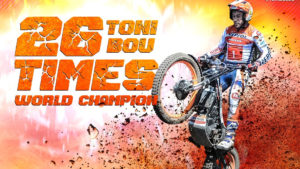 Jeroni Fajardo (Gas Gas) was fourth with 30 points ahead of Japanese pilot Fujinami (Repsol Honda) with 36. In this fantastic way and with still one race left in the season, Toni Bou took his 26th trial title as well as his 111th victory. All in all, the Spaniard’s season could not have gone better having won every single of its six races so far in Italy, Japan, Holland, Belgium, Portugal and France.

Thanks to the very mature driving style that comes with his 32 years of age, Toni Bou has been more consistent than ever this season. As far as his physical fitness is concerned, his age has been no obstacle, having shown absolutely no trace of weakens or tiredness, If anything, the opposite has been the truth. 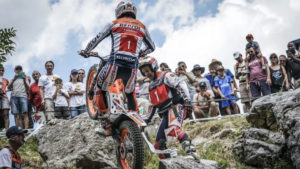 The Spaniard seems more focused and stronger than ever and displays a very intelligent driving style. Not even the injury he suffered right before the start of the championship at the Honda Thanks Day in Japan, where he broke two ribs, has been able to stop him. Not good news for his adversaries who for now have to carry on living under the very long shadow of Toni Bou.

The Catalan champion and his Montesa make a perfect, unbeatable pair. The man and his machine make all other adversaries brace themselves at every race they take part in. In Auron, his last hurdle towards the new title, Toni Bou put up yet another exhibition of his power. 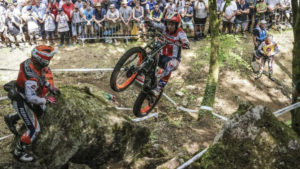 It seems that Toni Bou’s hegemony is going to continue for now. As for his new challenges ahead, it is anyone’s guess. Perhaps to surpass the also 13th outdoor titles of Laia Sanz or maybe to follow on her footsteps and heading to the Dakar Rally… we will see.

For the time being, he will be closing down the season at home. The Spanish TrialGP will take place on the 21st and 22nd of September at La Nuncia, Valencia.