CompetitionAnatomy of a failure: Alonso doesn’t make the cut for the Indianapolis 500

21 21 May, 2019
mclaren, fernando alonso, 2019 Indy500, Indianapolis 500
Fernando Alonso will not be taking the start at this year’s Indianapolis 500 on the 26th of May. His McLaren #66 hasn’t been quite at the necessary level to be given one of the three remaining positions up for grabs at the ‘Low row shootout’; the last chance to get a place on the last row of the grid.

Fernando Alonso has been 31 thousands and one place short from the 33 cars that will compete in the legendary oval. This was a hard blow for the Spaniard as it means renouncing to his main challenge for 2019: Winning the Triple Crown.

Having won the 24 Hours of Le Mans in 2018 and the Formula 1 Monaco Grand Prix this was the last hurdle to be awarded such prestigious honorary title and thus secure a very special place in the history of Motorsport. 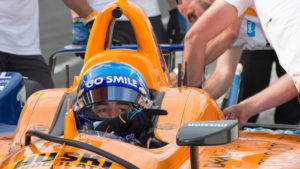 This is also a monumental failure for the Woking team. The British Scuderia has suffered from some serious lack of planning, continuous improvisations and overconfidence, all of which have dragged the twice Formula 1 World Champion into an unworthy situation.

Fernando Alonso had to play all or nothing with James Hinchcliffe, Max Chilton, Sage Karam, Pato O’Ward and Kyle Kaiser on Sunday. Three places for six drivers. Excitement, nerves and suspense in a vibrant head or tails. A very sombre Fernando Alonso took to the track in third place after Hinchcliffe and Chilton. 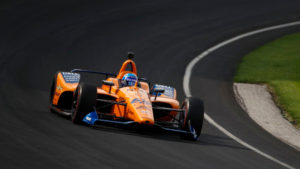 Fernando Alonso completed the four laps at an average speed of 227.353 mph, squeezing the most out of his car which appeared more docile than in previous days.

With Hinchcliffe and Karam ahead of him and Chilton and O’Ward eliminated, Kaiser became the main threat to the Spaniard. Everything was hanging on a thread. Aboard the Juncos Racing car, however, Kyle set an average speed of 227.358 mph.

The McLaren, a car with no sponsors and made up of pieces borrowed from other teams to repair the accident of a few days earlier, had left Fernando Alonso out of the game by 0.005 mph.

In the end, the worse happened, much to the embarrassment of McLaren. The British team had been awfully self-complacent again just as they were during their Formula 1 stint with Honda between 2015 and 2017.

McLaren and Fernando Alonso’s Indy 500 adventure has been rife with problems from day one. The English team was plagued by all kinds of mechanic faults, mistakes and a general lack of coordination already during the free practice week. The first warning of what was to come happened at the inaugural test session on May the 14th.

On lap 49th, the car started losing power due to an electrical issue. It was the same fault that had surfaced during the rookie’s tests three weeks earlier. This setback prevented Fernando Alonso from completing the scheduled work program, reducing his total number of laps alarmingly. The rest of contenders continued accumulating kilometres aboard their cars.

Most disconcerting of all were the words of the head of the team, Gil de Ferran, who admitted not knowing the origin of the problem. Face with such conundrum, he gave the order to replace all of the electric wiring of the car.

After the initial disappointment came the second day of tests. The pace was slow and the car was unruly. It seemed apparent that the poor performance an unpredictability of the McLaren was due to some deeper structural deficiency. 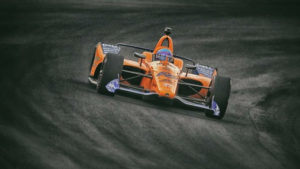 In one of the bends of the International Motor Speedway, Alonso crashed into the wall at over 350 km / h. Fortunately, he was unharmed. His onboard camera revealed the continuous corrections that the Spaniard had to perform at every bend to be able to stay on course.

As a result, he was constantly wasting time and taking a great risk. Driving in those conditions meant he was always on the verge of crashing.

To add insult to injury, it took an incomprehensibly long time to repair the damaged car. The Spaniard could not climb back into the McLaren #66 until Friday. It was goodbye to the third and crucial, 7-hour free training session.

De Ferran himself acknowledged that they had to borrow pieces from other teams. In addition to that, they had to mount those pieces in the second chassis, belonging to their partner Carlin, so the performance would be even worse. 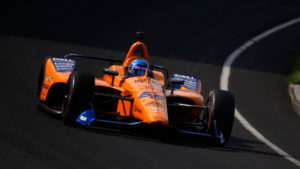 Simply, grotesque. As if this wasn’t enough, the free session had to be cancelled because of the rain. Alonso was left to jump without a safety net, and he crashed into the ground.