Formula 1 has taken the lives of many drivers throughout its history. Legendary names such as Ayrton Senna, Gilles Villeneuve or Jim Clark, became immortal symbols of the sport at the wheels of their machines. A number of monuments have been erected as permanent tributes to the memory of those masters of speed.

To coincide with All Saints Day celebrations on Friday, where cultures across the world remember those loved ones that have passed away, we take a look at some of those memorials and to the lives of those they honour.

At the Parque Acqua Minerale, next to the Imola Circuit, a statue of the Brazilian and three-time world champion (1988, 1990, 1991), emerges from among the languid trees. Sitting on his pedestal, Senna’s melancholic figure seems to be sadly looking at the very same Tamnurello turn, where he lost his life that fateful 1st of May of 1994.

The whole place exudes a special, emotional atmosphere as if all of the memories of Senna’s many feats were conjured up into the tranquil air. Eternal silence and admiration.

Surrounded by the everlasting love – and sorrow – of his many fans, the memorial has become a sanctuary of the South American star. Flags, messages, flowers and other objects brought there in his honour, populate the feet of his statue, as silent witnesses of an irreplaceable loss. Senna, SEMPRE!

Jim Clark: An homage from his home town

Nicknamed ‘the Flying Scotsman’, it was not unusual to see Jim Clark walking along the streets of Kilmany. That simple activity helped him switch off from the stress of the competition. In one of the avenues of this his home town, a memorial statue was therefore erected for this their most famous sons.

Clark died on the 7th of April 1968 during a Formula 2 race at the Hockenheim Circuit in Germany when he was just 32 years of age. At the very same bend where he lost is life there is also another monument in his honour.

Considered to be the best driver of his time and one of the best of history, his disappearance sent shockwaves across the Formula 1 world as big as those that came with the passing of Ayrton Senna. Both tragedies also share certain similarities such as the strange circumstances that caused the two accidents, which to date remain unknown.

Gilles Villeneuve: The prince of speed

Despite never conquering a world title, the great Canadian driver left a deep mark in the hearts of Formula 1 fans. It was not only his six victories, thirteen podiums and two poles that gave him universal fame but also his natural talent on the track.

The worldwide admiration for Villeneuve resulted in several memorials being erected in different countries. Among them stands out the simple marble plaque located at the exact point of the Belgian circuit of Zolder where he lost his life on May the 8th 1982.

On that sombre day, his Ferrari crashed into another slower car during the qualifying session of the Belgian GP. The impact was so violent that he was ejected from the cabin. Like Jim Clark, he was only 32 years old.

The best ever Formula 1 driver in Sweeden has a spectacular memorial in his honour in his city, Örebro. It was there that Peterson came to the world in 1944. On the 11th of September 1978, at 34 years of age, the Scandinavian driver was involved in a brutal multiple accident during the Italian GP at Monza.

As a result of the impact, his Lotus caught fire. Fellow drivers James Hunt, Clay Regazonni and Patrick Depallier managed to rescue him from the flames but he was left waiting on the asphalt of Monza for more than twenty minutes waiting for medical assistance. 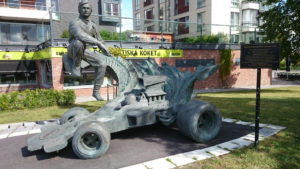 When help finally arrived, he was transferred to a hospital in Milan where he underwent surgery for multiple leg fractures. Despite the procedure being labelled a success, he couldn’t recover from the complications derived from the very serious injuries that he sustained. The Nordic legend left the world after having been second in 1972 and 1978, and precisely in the year when he was fighting for the crown.

The Argentinian five-time-champion (1951, 1954, 1955, 1956, 1957), one of the greatest F1 drivers of all times, has a special place in his honour in Monaco. It was precisely in the streets of the Principality that Juan Manuel Fangio conquered two of his 27 Formula 1 victories, the first in 1950 with Alfa Romeo and the second and last in 1957 with Maserati.

Funnily enough, none of those wins happened onboard the Mercedes W196 with which he has been immortalized in Monte Carlo. That was the car, however, on board which ‘El Chueco’ conquered his fifth title. Retired as a universal hero in 1958, ‘The Master’ died in 1995 at 84 years of age.

Also at the entrance to the Circuit of Donington Park (England) a monumental complex is remembered showing “The Master” with his “admirer”, Ayrton Senna.