Formula 1Carlos Sainz interview: “Being fourth in 2019 F1 is not enough”

McLaren’s Formula 1 driver Carlos Sainz has made a stopover this Monday in the Spanish capital on his way to Singapore, where he is headed to take part on the first race of the last third of the season next weekend.

In a press conference organized by his sponsor, Estrella Galicia 0,0, the driver from Madrid has taken stock of his own individual as well as his team’s performance to date, and has talked about what’s currently happening in F1. 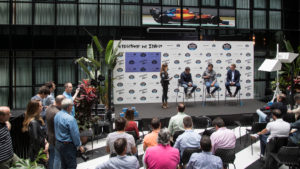 Carlos Sainz is optimistic about the upcoming race in Asia despite the recent fiascos in Belgium and Italy, both of which he was completely powerless to avoid.

It was in Singapore 2017, at the end of the day, where the Spaniard reaped his best ever F1 result to date with a fourth position with Toro Rosso; “I want to do well again after what happened in those two races. Singapore is also a circuit that I am always good at”.

As for this Sunday’s objectives, Sainz said; “That fourth place (Singapore 2017) was in a race under the rain, which is not very common. This year, if it is dry, the goal remains to be the fourth team and seventh or eighth at the individual level. But of course, if it rains, things turn unpredictable”.

Afterwards, Sainz recalled how the team felt at the start of 2019; “At the beginning of the year, there was uncertainty about where we would really be after the progress we had made during the winter. When I tested the car, I thought that that McLaren was superior to the 2018 one, and that we will now fight for higher goals, as we demonstrated right from the first race. Thanks to that, our current position in the championship is equal or better than the goals we had initially set for ourselves”.

Carlos Sainz: “We don’t want to just be fourth”

The Spanish driver, however, has already set himself new goals; “We don’t want to be there to just be fourth, we want to go further. We want to progress as a team and as a brand, but much remains to be done, although this first half of the season has been very positive”.

Regarding the team that he found when he arrived, Sainz has highlighted how this has now changed thanks to a renewed ambition and optimism. Also, he said the arrival of (James) Key and Andreas (Seidl), “Will be noticeable from 2020”.

About being chosen as one of the driver most highly-regarded by fans, the Spaniard said: “Of course it is an honour to be placed in the top three in that category. But it is the result of the collective work of the team and of having found a place where you can really thrive.”

In spite of the recognition, Carlos has emphasized that “people’s minds change and it is necessary to continue to be strong in each race“.

Sainz is also pleased with the greater permissiveness given now on F1 fights: “This year there has been more freedom in the fights on the track and I think this is a step in the right direction. There are more incidents and battles which go without sanction, even though one might complain when it is his turn.”

As for his teammate Norris, Sainz has revealed: “Both of us (Norris and Sainz) are enjoying the races and the F1. McLaren is also enjoying itself as a team again and that is partly thanks to Lando and me because we get along and that boosts team spirits. As well as having a restructured team and a good car”.

Regarding results, he has asked for a little patience: “These are all changes that take time, although we are enjoying it a lot, that is the way I see it in the factory. We must wait a few years and be able to continue progressing little by little”.

Carlos Sainz has also pointed out to some of the key issues for the near future: “We have already gone a long way regarding next year. This will be the first car managed by new Technical Director, James Key, who has already joined us. That will be the first step. But until 2021 it is going to be very hard to get close to the big three. We will not be able to do so until we have our own wind tunnel”.

Finally, the Spaniard has declared that “McLaren is beginning to be where it should be, although we are still a second away from the poles and the victories”. In order to reduce this gap, Sainz considers again that the new wind tunnel, which should be built in a couple of years, is essential.