The twice Formula One World Champion, Fernando Alonso, continues with his training for his more than likely participation in the 2020 Dakar Rally in Arabia Saudi. After touching down at the Namibian dunes and a couple of training sessions later on in Poland, the time has come for his first real competition.

The event, known as the Lichtenburg 400, will take place on the 13th and 14th of September and it is the fifth date of the South African Cross-Country Series (SACCS), which takes place in the town of Lichtenburg, 230 km west of Johannesburg.

The Spaniard, however, will not be an actual part of the competition as his time won’t count towards the final outcome of the rally. His role will be more like that of a zero car. Alonso will go through all of the specials ahead of the other participants onboard his Japanese missile.

He will also carry out the role of inspecting the state of the layout before the start of the real race. The Spaniard will be able to take away some very valuable information from this experience.

He will also have a chance to compare his times with those of the other participants, and what better way of measuring one’s progress and level of adaptation to a new discipline than within a real-life scenario such as that. He will also continue accruing valuable mileage on his Toyota Hilux 4×4.

Next appointment: The Rally of Morocco

After that important milestone in South Africa, Fernando Alonso will continue with his busy training agenda. The Spanish champion of  Toyota Gazoo Racing team want to evaluate his ability before he formally puts his name down for the Dakar 2020.

Next month, Fernando Alonso will have to face one of the key tests in his schedule if he wants to fulfil his objective, as it was recently reported by the Spanish National Television. The Spaniard’s first official competitive raid will be the Moroccan Rally of 2019 which is to take place from the 3rd to the 9th of October.

Sitting besides Alonso will be Marc Coma, a real institution as far as the Dakar Rally is concerned. Not in vain, the Catalan ex-pilot has conquered the most famous raid in the world in five occasions (2006, 2009, 2011, 2014 and 2015), all of them with the Austrian team KTM.

Coma’s extensive experience of the Dakar Rally goes well beyond its purely competitive side. The famous champion from Barcelona was also Sporting Director of the raid between 2016 and 2018. 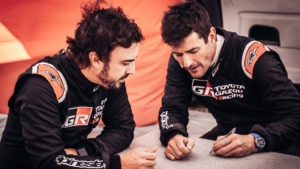 Despite Coma’s invaluable help, the final decision will be Fernando Alonso’s alone. The Spaniard will be the one that will have to finally evaluate if he has adapted to such a unique and demanding discipline with enough confidence as to be able to face the challenge with any chance of succeding.

Another hurdle: The Camel Thorn Bush

The challenge ahead for Fernando Alonso involves many different hurdles and difficulties. One of the latest ones that the Spaniard has had to deal with during tests has been the dreaded camel thorn bush. These small bushes grow in the desert and represent one of the greatest dangers of off-road driving.

Alonso has been able to experience the effects of such plant first-hand. The small bush is able to seriously disrupt the rhythm of the Toyota Hilux 4×4 in this type of surface, precisely the one in which this car’s performance is weakest.

The short suspensions of the Hilux, smaller than that of other two-wheel-drive vehicles, finds it difficult to absorb this kind of obstacles. The dynamic behaviour of the Toyota makes the cabin shake considerably when driving through these plants.

There is no doubt that the camel thorn bush poses an extra strain for both driver and machine.