Formula 1Carlos Sainz is now part of the F1 elite

18 18 Jul, 2019
mclaren, carlos sainz, F1 2019, 2019 F1 drivers
After his epic comeback from thirteenth to sixth at the British Grand Prix, Carlos Sainz continues with his best Formula 1 season to date. His role in the F1 continues to grow and he is already considered one of the main drivers in the grid as well as a feared adversary.

The Spaniard driver remains as the third best driver in a list that updates the Formula 1 after each Grand Prix. According to the Power Rankings, drawn up by five experts of the F1, it only has Lewis Hamilton and Max Verstappen behind.

This is the Carlos Sainz’s fifth year in F1 and over this time he has reached the necessary maturity and consistency to be brought level with the most brilliant and reliable drivers of the grid. 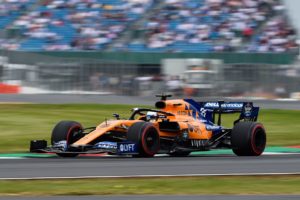 He currently occupies the seventh place in the standings and has so far consistently been the best of the rest, as they call it. In other words, leaving the exceptional three aside (Mercedes, Ferrari and Red Bull), the McLaren #55 heads the second division of Formula 1.

Carlos Sainz’ numbers this season reveal the Spaniard’s great evolution in McLaren. He has accrued a total of 38 points over 10 races, his best results since arriving in the F1 in 2014.

He is 13 points ahead of next driver down in the standings, Kimi Raikkonen, and 16 points and two places further up than teammate Lando Norris. Also, if it hadn’t been for his unlucky start of the year (no points in the first three races in Australia, Bahrein and China), he could very well be sixth overall today. 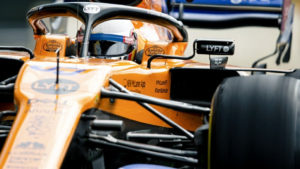 The McLaren #55 has actually come in sixth in three occasions (Monaco, France and Great Britain), his best result of 2019 so far. Effectively, this means he not only has been able to leave behind everyone in his category but also to rise above one of the unbeatable six.

This is only Sainz’ first year in McLaren after Renault but the progress that he has managed so far at the wheel of the MCL34 has been excellent, and so has confirmed McLaren’s sporting chief Andreas Seidl.

The German engineer has confessed he didn’t expect to see Carlos Sainz so high up in the standings, particularly after the car came in ninth at the pre-season tests in Abu Dhabi.

Almost five years after his F1 debut, Carlos Sainz has become a very efficient driver, especially on race days. He is able to squeeze everything out of the MCL34 at every appointment, sometimes pushing the machine further than its supposed technical potential. 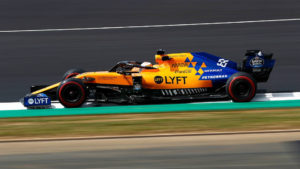 The 24-year-old driver has turned out to be a real racer, a natural-born competitor that, when it comes to it and points are at stake, doesn’t disappoint. Consistency, a high pace, no mistakes and cunning are the basic ingredients that he brings to the track every race Sunday.

One of Carlos Sainz’ signature moves is his great starts, just as the one he performed this year in Silverstone. As soon as the lights went off, he passed the Alfa Romeos of Kimi Raikkonen and Antonio Giovinazzi with such ease it seemed we were looking at a videogame.

This ability to take over rivals at the beginning of the race has served him to cultivate the other trait that he is well known for: His famous comebacks. In Britain, he climbed up seven places from thirteenth to sixth. Overall, he has taken a total of 31 positions since the beginning of the season in Melbourne.

The Spaniard also seems able to conserve the life of his tyres better than the rest, lengthening their useful life span and allowing himself more flexibility in his box strategy; another great advantage over his rivals.

If Carlos Sainz is able to interpret the races better than most, his main weakness are the Saturday sessions. The classifying rounds are the Spaniard’s Aquiles Heel. For whatever reason, he is not able to feel comfortable and relaxed on Saturday’s sessions. Even his more inexperienced teammate, Lando Norris, surpasses him 7-3 in this respect.

Sometimes, however, there has been an external factor which has prevented the Spaniard from obtaining a good classifying position. In Australia he came across a yellow flag, in China, he had to deal with Kevin Magnussen and in Britain, he had trouble with his back wing.

Knowing the competitive and perfectionist personality of Carlos Sainz, however, he is sure to be analysing every detail in order to improve this aspect of his performance.