Formula 12019 Chinese F1 GP: Victory for Hamilton and the third one-two for Mercedes 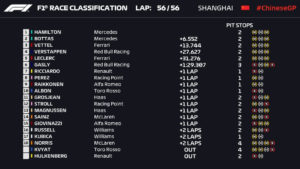 A great start for Hamilton and Leclerc

Extraordinary start at the 2019 F1 Chinese Grand Prix from the #44 of the Silver Arrows, who made a pass on his teammate and pole-holder Bottas as soon as the lights went out. Behind, Charles Leclerc replicated the move performing a fantastic manoeuvre and taking the third place from his senior colleague Sebastian Vettel. The German driver remains sketchy when it comes to ‘face to face’ duels.

Behind them, the Red Bulls of Max Verstappen and Pierre Gasly held onto their fifth and sixth positions. Daniil Kvyat earned himself in China the ‘torpedo’ nickname that Vettel had given him in the past. 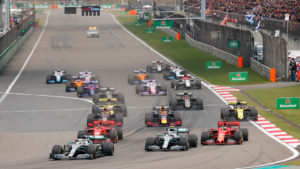 The Russian from Toro Rosso launched into Lando Norris’ McLaren on the sixth bend of the first lap at the 2019 F1 Chinese Grand Prix. Carlos Sainz was also involved in the melee. The race was ruined for the orange cars which had to go to pits in order to fix the damage sustained. Fortunately, they were able to take advantage of the virtual safety car.

Meanwhile, at the head, Hamilton was gradually opening the gap with his Finnish partner, which soon was over two seconds away. At the same time, Charles Leclerc was also keeping the German four-time champion at bay. One position below an ambitious Max Verstappen was on the hunt. 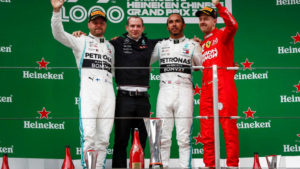 On lap #11 at the 2019 F1 Chinese Grand Prix, however, came in the dreaded radio message for Leclerc. Ferrari ordered the Monegasque driver to give up his position in favour of his teammate. Leclerc obeyed the order reluctantly as he bid goodbye to his podium options despite being faster than Vettel.

In addition, he now had to worry about the lightening Dutchman from Red Bull who was closing in from behind. Shortly after, the German started shortening his distance with Bottas until he was a mere 1.8 seconds.

We are getting used to Verstappen shaking things up every Sunday, and today he did so again being the first one to pit on lap 18 and creating a chain reaction from all the favourites. At the 2019 F1 Chinese Grand Prix, Vettel made his stop a lap later to prevent being undercut by the #33 from Milton Keynes. 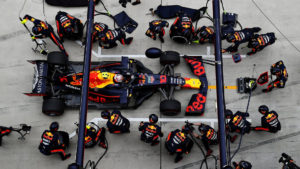 On lap 22 came the double pit-stop of both Mercedes, a move which further hurt young Leclerc’s prospects, him being last of the leaders to go through boxes in lap 23. The damage for the young Monegasque was done. Incomprehensibly, the Prancing Horse’s team had kept him on track even though his tires were visibly slower than the rest, making him lose some crucial seconds. 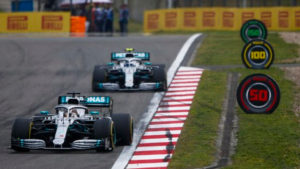 The top positions got consolidated once more. Hamilton was cruising at the lead followed by Bottas 1, 757 seconds behind. Vettel was third at almost 6 seconds away from Bottas and Verstappen was running three seconds further back.

Leclerc was now fifth, a whole ten seconds behind Verstappen. Sainz despite his initial misfortune managed to set a relentless rhythm but not enough to pull himself up from his initial fourteen position.

Second pit stop from the leaders and Mercedes’ crushing success

Max pitted again on lap 36 to protect himself from Leclerc, who had cut down his distance with the Dutchman to less than three seconds. Vettel, Lewis and Bottas replicated the move on the same lap in another double pit stop for Mercedes.

The Ferrari #16, however, was kept on track until lap 43. Another involuntary mistake from the team towards their young driver? The battle with Verstappen was now definitely lost for Leclerc at the 2019 F1 Chinese Grand Prix. 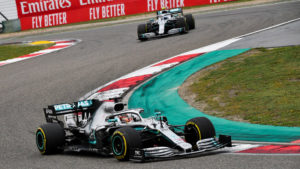 Everything was already decided at the top where the two silver bullets were shining brightly once again. Hamilton was sailing to his 74th triumph, the second consecutive after Bahrain, and to the lead of the standings from which he would oust his teammate Bottas.

The Scandinavian driver seems to have gone back to his supporting role arriving almost seven seconds behind the five-time English champion. More than 10 seconds away rolled in Vettel to grab the third position thanks to his team orders. ‘Mad’ Max, narrowly missed the podium in number four and finally, in the fifth position came in Leclerc, the great casualty of the day. 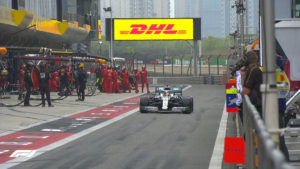 This is the third consecutive one-two for Mercedes since the start of the season and a new blunder for Ferrari. No other Scuderia has started the year so strongly since Williams would do so in 1992. Vettel, on the other hand, hasn’t had a victory since Spa in August 2018.