Formula 12019 F1 French GP: Hamilton shines in yet another 1-2 for Mercedes

His lethargic teammate, Valtteri Bottas, has saved the second place by a few hundredths of a second before a very strong Charle’s Leclerc who has ended in third position.

Max Verstappen and Sebastian Vettel completed the top 5. The German driver from Ferrari has at least had the honour of subscribing the fastest lap. 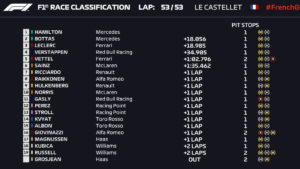 One step below the top 5 came a sensational Carlos Sainz, who also moves up one position in the standings. His teammate in McLaren, Lando Norris fell three places to the tenth position, finally, 9th for Ricciardo penalty– in the last lap after having some issues with his MCL33.

The five-time British champion has taken over Le Castellet and finished with a 36 point-advantage over teammate and second classified Bottas. This finished also second in France but a whole 18s behind his teammate. 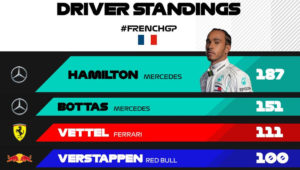 The other great loser was Vettel, who leaves the Cote d’Azur further away (76 points) from the leader in the overall classification. A great performance by the young Monegasque driver who has taken his second F1 podium and third for his team in 2019.

A vibrant start by Carlos Sainz

Lewis Hamilton was off to an outstanding start keeping his pole position ahead of Valtteri Bottas and Charles Leclerc. A few metres behind there was an orange glow.

Sainz came in line with Max Verstappen after passing teammate Lando Norris. Unfortunately, he got locked in behind the Monegasque’s car, who blocked his advances on the Dutchman’s Red Bull. Meanwhile, Vettel, in the seventh position, was soon hot on the heels of Norris. 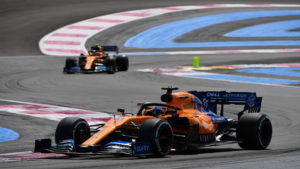 The German driver knew he had to take over Norris to start his climb back to the lead, and so he did on lap 5. Two laps later he also passed the other MCL33 with incredible ease. It is in this kind of manoeuvres that the superiority of the Red Bullets becomes apparent. Vettel was now fifth.

Meanwhile, the Mercedes #44 sat a ferocious rhythm, opening up more and more ground between him and his prosecutors. By lap five he was already 1,633 seconds ahead of Bottas. It was hammer time! On the same lap and 1, 5 seconds behind the Finn was Verstappen.

By lap ten, the Briton had a 2,5-second lead just as the rest of the grid settled into their positions. Leclerc, Verstappen and Vettel kept their respective distances to each other in the lead of the race.

In an unusual move, McLaren sent Lando Norris to boxes on lap 19 before team leader Carlos Sainz, who was ahead at the time. A lap after that, the team repeated the move with the Spaniard. This incomprehensible strategy could have cost Sainz his position.

The chess game commenced on lap 21, midway into the race. Ferrari performed the first movement, sending Vettel to pits and the Dutch driver from Red Bull followed suit in an attempt to prevent any false move from their Italian rivals.

Leclerc changed his tires on lap 22, one lap ahead of Bottas. By that point, the Scandinavian driver was already almost nine seconds behind Hamilton. 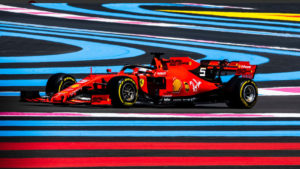 The champion from Stevenage continued flying around the Paul Ricard until he went to pits on lap 25. Finally, Vettel pitted at exactly the same time.

Despite the intense activity nothing really changed positions-wise after the pit stops, and the Briton from Mercedes kept on increasing his advantage. He was now 11,619 seconds ahead. 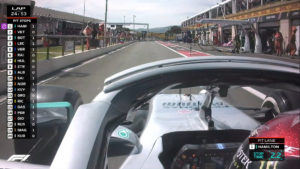 The duel between the McLarens

The most excitement was now coming from the orange cars. Lando Norris kept on complaining over the radio about his teammate’s rhythm, which was allegedly blocking his way.

The Spaniard was actually trying to keep control of the race, increasing his pace and the distance with his teammate every time that his team requested him to do so. 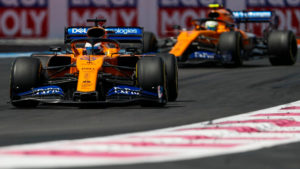 Hamilton continued sealing one fast lap after another. The race had been decided for a while. The Briton crossed the checkered flag almost 20 seconds ahead of Bottas, who in turn got to the finish line less than a second ahead of Leclerc, third.

Verstappen was fourth and Vettel fifth having completed the fastest lap after changing his tires in the last moments of the race to that effect. Carlos Sainz got a sensational sixth place. 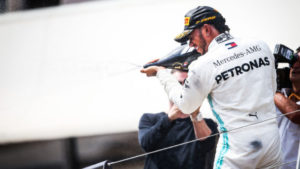 While Norris fell to tenth after suffering some problems with his car’s hydraulic system and after Ricciardo (7º), Raikkonen (8º) y Hulkenberg (9º) passed him on the last lap.  But, finally, the Australian had a double five seconds penalty for dangerous overtaking and finished 11th and Norris, 9th.