One of the most remarkable cars to ever participate in Le Mans has been the Porsche 917 ‘Pink Pig’, in 1971. Despite never making it to the checkered flag, this specimen has become one of the icons of the motorsport world.

As soon as this 917/20 stepped into the track at the training session in the Circuit of La Sarthe, both fans and press alike (and even its own rivals), fell under the spell of its unique looks.

No one had ever seen such a...how can we put it? Original design at a race track. A competitive beast painted in pink? And that was not all, its livery had all the different cuts of pork mapped out, names and all. Yes, the car had been made out to look just like the poster of a pig.

It started as a vengeance

Spectators were soon wondering why the German missile had been given such unusual attire. Some started speculating about the ‘secrets’ behind every detail of the car’s pink body. Such an eccentric design, however, has a less imaginative origin. 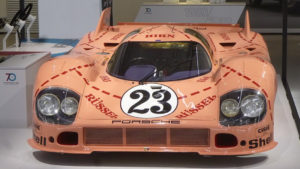 It was all about a very artistic workplace dispute’s vengeance. Tony Lapine, Porsche design chief at the time, was commissioned to create a drawing for a new model to participate in the 1971 edition the 24 Hours of Le Mans. His proposal was finally rejected in favour of another project entered by French company SERA. 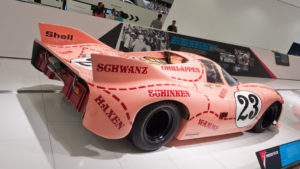 Mr Lapine was not very pleased with their superior’s decision and, in order to make amends, his bosses decided to compensate him in some other way. They appointed him to design the car’s livery. The affronted employee then saw the perfect chance to express his discontent in his own unique way.

His not so subtle message was a design resembling a pig with all of its cuts mapped out such as those posters usually hanging on butcher’s walls.

The new racing creature caused a great stir and an effect quite contrary to that intended by the author. The public loved the amusing aesthetics of the Porsche 917/20.

The German car, however, did not want to make history only because of its looks but for its sporting achievements and it started the race in the seventh position. But luck was not on its side that year. 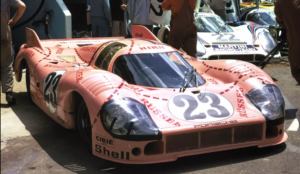 The #23 of the Martini International Racing Team, shared by German drivers Reinhold Joest and Willi Kauhsen suffered an accident mid-way through the 24 Hours of Le Mans. They were in fifth place and had completed 180 laps of the French circuit, but were forced to bid goodbye to their fans. 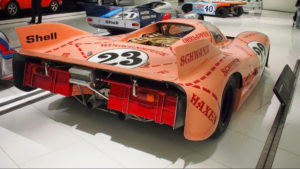 Despite its early retirement, the Porsche 917 “Pink Pig” was forever remembered by fans which gave it plenty of affectionate nicknames in different languages. The French called it Le Cochon Rose, the Britons, Big Bertha and the Germans Der Tuffeljäger von Zuffenhausen

And this is the story of how a livery designed in revenge after a professional offence became an icon of motorsport history. The legendary creature has resided in the Porsche Museum in Stuttgart ever since.

In memory of the original Porsche 917 “Pink Pig”, the German firm decided to replicate its livery on a 911 model that ended up winning the LMGTE-Prom category of the 2018 edition of the 24 Hours of Le Mans.