With the taste of the French champagne still lingering in his mouth, however, the Spaniard is already thinking about his next challenge, most likely the one surrounded by sand and dunes. Off-road racing?

Probably. And among all of the off-road races, it has to be the Dakar, the toughest and most important rally in the world. 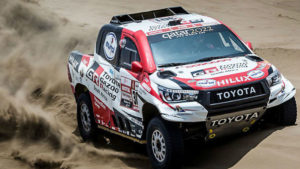 The Spaniard, who has already tried the Toyota Hilux in Sout Africa, is considering taking part in the next edition of the legendary raid. Well aware of the media flurry that follows the Spaniard everywhere he goes, the Saudi organisers must be pulling all the strings to convince him to take part.

Having a twice Formula 1 world champion and twice Le Mans and WEC winner on their debut edition in Saudi Arabia would greatly aid with the renewed open and international image that the Middle Eastern country wants to portray to the world.

To this effect, Yann LeMoenner, top chief of ASO,  Dakar’s rights owner company, paid a visit to Fernando Alonso in Le Mans and both men met on Saturday morning before the race for a brief chat.

Although nothing has yet been put on paper, several contacts have taken place over the last few months. One of the key issues on the table would be the search of a co–pilot for Fernando Alonso. It seems that the first candidate on their list would have been Lucas Cruz. 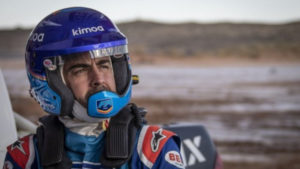 Carlos Sainz’ co-pilot, however, would have declined the two-year contract offer. The next on the list is likely to be Alex Haro. Haro has been Nani Roma’s co-pilot since 2016, a year after he debuted in the rally with Andorran driver Albert Llovera.

Before the Dakar: To get the kilometres under the belt

The Spaniard would have to undergo an intense training programme if he is to participate in the Dakar. Starting in a new discipline such as this would require a complete adaptation process.

Unlike other specialities such as the WEC where, at the end of the day, conditions are relatively similar to Formula 1, rallies are a whole new kettle of fish.

Racing at the Dakar rally will involve coming face to face with completely unknown terrains and situations and it would call for a radically distinct approach to that of the ‘speed type’ races to which he is used to.

Alonso has already signed up for the Moroccan Rally, which is to take place at the beginning of October. There, under very similar conditions to those found in Dakar, he will have a chance to measure himself against some of the best drivers in the speciality and truly gauge his chances of success.

Before the African appointment, by which time he should have already got some kilometres under his belt, and during the summer months there are some other similar races, such as the Baja de Aragón, where the Spaniard could start his training.

In any case, the Spanish “Bajas” (shorter rallies) do not tend to have much sand, a crucial element of the Dakar 2020. Other, more akin competitions, could be the South African appointments of the SA Cross-country Championship Series in August and September, the usual training ground for the Toyota Gazoo Racing testing and developing of its Hilux before the Dakar.

Alonso’s hypothetical participation in the Dakar rally would perfectly fit into his overall objective of becoming one of the most complete drives in history. It is because of this that the Spaniard doesn’t cease to explore new motorsport challenges.

The ultimate goal, of course, continues to be the 500 Miles of Indianapolis, his only victory left to be awarded the coveted Triple Crown of Motorsports.