Fernando Alonso and his Toyota #8 teammates Sebastian Buemi and Kazuki Nakajima have won the 24 Hours of Le Mans 2019, last race of the 2018-2019 World Endurance Champion Super Season, this Sunday at the Circuit of La Sarthe. With their victory, they have also secured the WEC driver title. The Spaniard keeps on adding victories to his curriculum. 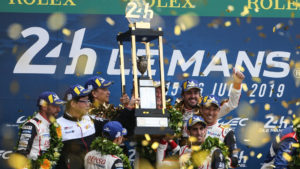 True to its tradition, the legendary French race is the one that has chosen the winner, keeping the suspense almost right up to the checkered flag. The sister car of the victors, the Toyota Gazoo Racing #7 has not been as lucky.

The crew of #7 José María ‘Pechito‘ López, Kamui Kobayashi and Mike Conway could feel the taste of glory in their mouths when there was just one hour to finish. They were convinced that 24 Hours of Le Mans 2019 was going to return them the glory that it had denied them a year before.

Alonso himself, after the award ceremony, acknowledged in a statement to the press that his teammates and rivals for the crown had been the fastest throughout the weekend.

And those words weren’t merely to make the losers feel better but they were an accurate appraisal of what had been happening since the previous Thursday on the asphalt of the Loire region.

The TS050 #7 had shown enormous power right from the 24 Hours of Le Mans 2019´s qualifying session where it took an authoritative pole. Their pace seemed out of reach of the #8 of Alonso, Buemi and Nakajima.

The same feeling was also there on Saturday. Conway made his intentions and superiority clear by pulverising the record of the French track on both the first and second laps consecutively.

After that power display, the Toyota #7 became the top contender and favourite to take the victory at the 24 Hours of Le Mans 2019. When Alonso first got into his missile, he could barely cut any distance with the beast that had come from the other end of his own garage. 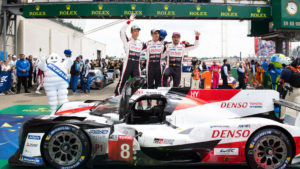 The dominance of #7 continued through the night. After dawn and into the following day nothing seemed to have changed much. A frustrated Alonso had been complaining of the lack of speed – about 5 km/h less on a straight – of his car.

With an impossible task ahead and before the three hundred thousand people who crowded the stadium, the two crews of the Japanese team seemed to be coming to terms with the inevitable. Was that all for the fates of the Toyotas? So it seemed at the 24 Hours of Le Mans 2019. 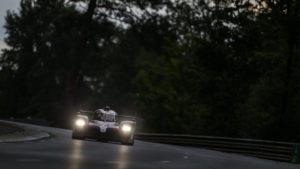 23 out of the 24 Hours of Le Mans were gone. Everything pointed to a happy ending for all the members of the Japanese team. The crew of #7 would get their precious booty in the form of a trophy and their opponents on #8, the sceptre of the World Endurance Champions.

At that point, Alonso was getting some of his strength back in front of a plate of pasta at the Toyota’s hospitality room. He was watching the race on television when he noticed that car #7 was slower than usual. Immediately, he went to check with the engineers at the 24 Hours of Le Mans 2019. 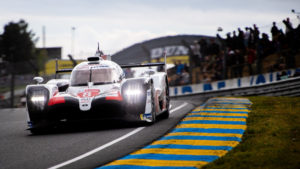 Soon he realised what was happening; “It’s a flat tire” – he said – and he was right. The Argentine driver Pechito Lopez said over the radio that he had to go to pits. A sensor had indicated an anomaly in one of the wheels.

That extra pit-stop meant they will be eaten up by the sharks of the Toyota #8. The TS050 #7 re-joined the track behind the new leaders of the race. The winning car of 2018 would replicate its success only twelve months later. The legendary race had once again chosen its winner in an unexpected and dramatic finale at the 24 Hours of Le Mans 2019. 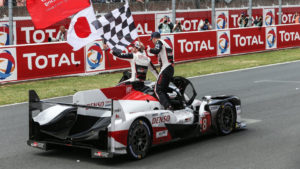 Alonso continues to write his Motorsport legend with a track record of successes. Which is going to be his next challenge? The Spaniard continues in his quest to become the most complete driver of all times and, as everyone knows, he is not only a very talented driver but also a very stubborn one.