Mercedes´s driver Lewis Hamilton has taken the 2019 F1 Canadian Grand Prix victory this Sunday at the Gilles Villeneuve circuit thanks to another mistake by Sebastien Vettel which cost him a five-second penalty, despite the German from Ferrari crossing the finish line first. His teammate Leclerc completed the podium at the seven round of the Championship calendar. 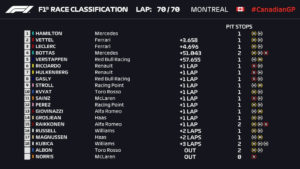 The other silver bullet of Valtteri Bottas followed in a very close fourth position and just ahead of a very consistent Max Verstappen and the brilliant Renaults of Daniel Ricciardo and Nico Hulkenberg. Unfortunately, Carlos Sainz didn’t make it in the points this time around as he was passed by Lance Stroll and Daniil Kvyat in the last lap. 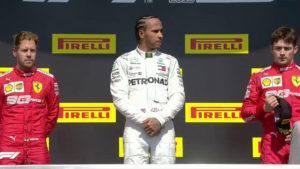 The Spaniard, who finished in the eleventh position, had accrued points over the last three races. Both Ferraris put up their best performance to date but lost nonetheless, in the same way as usual, after yet another mistake from Vettel. Hamilton carried out a dramatic chase until catching his German pray. As per current regulations, the penalty seems appropriate. 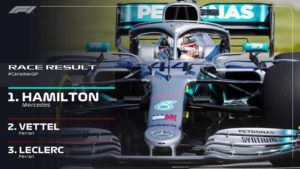 The driver from Heppenheim almost hit Hamilton as he pushed him against the wall after returning to the track from a trip across the grass. Hamilton equaled Michael Schumacher´s 7 wins record at  and Mercedes further consolidate their lead of the Championship.

The start of the battle

After an uneventful start of the race, the favourite four on the first two rows, Vettel, Hamilton, Leclerc and Ricciardo kept their positions at the 2019 F1 Canadian Grand Prix. A few metres behind, Hulkenberg passed Bottas for six. Vettel managed to open up a 1,895-second gap with Hamilton over the first few laps. Leclerc was third. 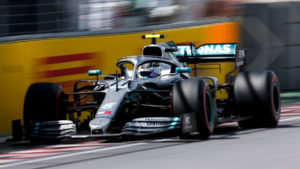 On lap four came a key moment on the race. Carlos Sainz went to boxes to solve an issue with his breaks and put on some hard compounds. At that point, the British team changed its strategy with the intention of not stopping until the end.

After a few laps when everybody consolidated their positions at the 2019 F1 Canadian Grand Prix, the first pit stops commenced on lap 26. Sainz own stop had helped other teams realise that the fastest tire was the hard one, and that was decisive. Vettel was increasing the pace in order to gain some extra ground over Hamilton ahead of his pit stop. 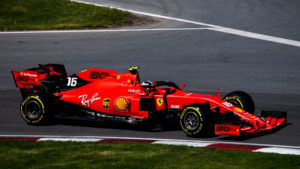 Three laps after that, Hamilton would follow suit. The Briton would rejoin the track in the third position with Bottas very close behind. On the provisional lead were both Leclerc and Vettel. On laps 31 and 33 both Bottas and Leclerc went to pits. The #5 from Maranello was again leading the race followed by Hamilton 3,3 seconds behind.

Just over halfway through the race the Briton was smelling the blood and increased the pace to cut down his distance with the leader to just 1 second. Hamilton was increasing the pressure on Vettel who could see the #44 from Brackley getting ever closer. 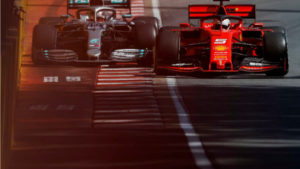 We are now used to Vettel losing his cool under pressure and this time around it was no exception. Vettel went off-track on bend 5 of lap 48. He kept control of his car and returned to the track but at the same time, he pushed Hamilton against the wall to stop him from getting in first. Only the Briton’s great reflexes saved him from crashing.

It seemed as if the #5 from Ferrari had managed to overcome a very delicate situation without losing the lead. Proud of his manoeuvre, Vettel opened up the distance with Hamilton again to 1,5 seconds. It seemed that Ferrari would finally taste the glory.

Vettel to bid goodbye to his triumph

On lap 59 at the 2019 F1 Canadian Grand Prix, Vettel was told the devastating news via radio. He had been given a five second penalty for re-entering the track unsafely, endangering a rival. According to regulation, the decision is not open for appeal, but it does seem somehow too strict from a strictly sporting point of view.

After the news, the German driver lost concentration. His radio conversations complaining of the penalty made him waste time. In order to beat Hamilton, he now had to complete the equivalent of eleven classificatory laps. Meanwhile, the Briton was closing in behind. There was no time for more.

Vettel crossed the line first followed by Hamilton and Leclerc. Then came the numerous shows of anger from the German driver. In the end, it was another of his mistakes that robbed him of the victory, at a race where Ferrari should have been stronger. The Scuderia of the star continues with its reign with 7 out of 7 wins, on this occasion, however, only one of their pilots climbed up the podium.