Lewis Hamilton has secured his fifth Formula 1 crown finishing 4th at the Mexican Grand Prix and after Sebastian Vettel was unable to win the race.

There is no doubt that the Hermanos Rodriguez is one of his lucky circuits. It was also at the Aztec track that Hamilton conquered his fourth title a year ago.

The British driver has climbed another step towards the Formula One Olympus as he draws level with legendary Argentinian driver Juan Manuel Fangio in number of titles.

Above the Mercedes’ hero is only Michael Schumacher and his seven world titles. No doubt, that would be the Briton’s next goal.

It is undeniable that Lewis Hamilton is already one of the brightest stars in the Formula One sky and one of the greatest drivers in history, but the Briton still hasn’t finished writing his legend.

Understandably, it was the Mercedes #44 that captured most of the spotlight on Sunday, but it was Max Verstappen who took the victory at the Hermanos Rodriguez. Both Ferraris, Sebastien Vettel and Kimi Raikkonen, shared the podium at the Mexican race. 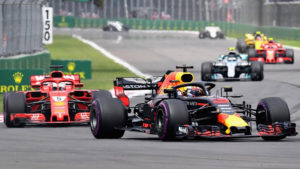 It was a total disaster for the Spaniards. Fernando Alonso had to retire on the fifth lap and his friend Carlos Sainz followed suit just 26 turns later when he was racing on an exceptional seventh place. Both had to withdraw due to some mechanical issues with their cars.

Ricciardo: Off to a slow start

Ricciardo was off to a slow start losing the pole position on the first few metres to team-mate Verstappen. Lewis Hamilton, in a dominant move, passed the Australian driver to place himself between both Red Bulls. Behind the three leaders came Sebastian Vettel, Valtteri Bottas and an extraordinary Carlos Sainz, who had climbed to the sixth position ahead of Kimi Raikkonen.

At the head of the race, the Dutch driver from the Milton Keynes’ Scuderia escaped at a lightning pace. Very soon, however, well before expected, the pit-stops would start due to the early wear of the tyres caused by excessive graining.

Tyres were disintegrating a lot quicker than expected. The flying Dutchman was the first to enter boxes for fresh rubbers at lap 14! Team strategies were breaking down quickly as Sebastien Vettel had to follow suit just for turns afterwards.

The rest of the pack tried to stretch the life of their tyres as much as it was humanly possible in a desperate attempt to keep it to one stop overall. If the worse came to the worse at least they would make the most of a delayed first stop.

On the 31st turn Sainz’ car broke down and he had to abandon the race triggering a Virtual Safety Car all the way up to turn 33. At this point in the race, Verstappen was comfortably settled in his first position. Following behind at a considerable distance was Lewis Hamilton, Daniel Ricciardo, Valtteri Bottas and Sebastian Vettel.

Vettel climbs up to second

On the turn 34, after the Safety Car had gone, Ferrari’s German driver made a pass on Daniel Riccardo who was slowing down because of excessive graining in his tyres. Vettel carried out a perfect manoeuvre and was now on the chase of Lewis Hamilton for the second position. On lap 39, a commanding Vettel took over the defending World Champion.

But the struggle came at a cost and on turn 48 the Ferrari #5 had to pass through boxes again. Lewis Hamilton’s Mercedes #44 followed straight away.

Verstappen was still alone at the head, until he himself went into boxes on lap 40, a perfect strategy from Red Bull who managed to keep the two top dogs of the championship Vettel and Hamilton at bay.

‘Mad’ Max was first out of boxes ahead of Ricciardo, Vettel, Raikkonen, Bottas and Hamilton, with both Mercedes seemingly suffering the effects of graining a lot more than the rest. Worryingly, after just a few laps, the silver bullets’ tyres were quickly degrading once again.

Red Bull’s hope for a 1-2 vanished at just nine laps from the finish line, on lap 62, when their Australian driver had to retire. Since the announcement of his move to Renault, Daniel Ricciardo has had to abandon most races. His exit triggered a new VSF which lasted until lap 64.

Victory for Max and 5th title for Hamilton

Verstappen was pacing out his advantage in order to save his tyres. He didn’t want to take any unnecessary risks when he was about to seal his fifth F1 victory. In the end, he crossed the finish line 17 seconds ahead of number two, Sebastien Vettel, and 49 seconds from Raikkonen.

Verstappen showed absolute dominance until the end, which allowed him to run slower on key moments in order to save his tyres from the graining that was wreaking havoc among all the others.

The real winner of the day, Lewis Hamilton, crossed the checkered flag in fourth position. The driver from Stevenage struggled with graining throughout the whole race, which prevented him from claiming a spot in the podium. He nonetheless had just become a five-time F1 World Champion and so it was mission accomplished for the Briton.