Formula 1F1 Australia | Sebastian Vettel and Ferrari; much more than the inaugural victory 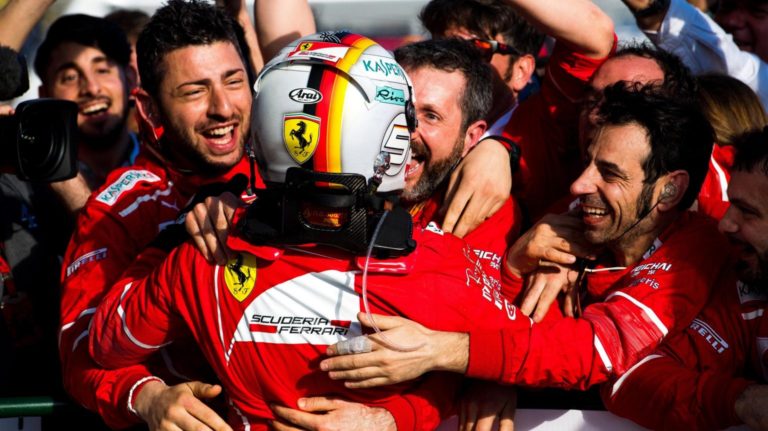 The winds of change where in the air and surprises were forecast with anticipation, but few expected them to happen so quickly. Sebastian Vettel’s enthusiastic embraces to his team mates at the end of the race signalled to more than just an initial victory. Only eight big prizes had been won over the last three years by someone not wearing the silver colours of Mercedes. This Sunday in Australia meant the ninth, an achievement greater than the points themselves.

Because, besides the results, what the start of the Australian Grand Prix really shows, is Ferrari’s potential to become the unbeatable Mercedes’ alter ego. Their new car has proved itself to be up to scratch and that is already a lot. The very start of the race already showed its potential, as the new Italian machine matched the ever furious take off of Hamilton. The British driver knew right away that this was not going to be a placid début but a very tense first race with an unexpected rival right behind. After 18 loops in this manner, Hamilton needed a pit stop. Vettel then took the reins and started forging his bombshell win. It is still to be seen if he can sustain this kind of performance and give the Grand Prix a big shake up.

Mid-term strategy also played a role. Ferrari seemed to know beforehand that its car would be a worthy rival, something that Mercedes appeared to be unaware of. The wearing out of Hamilton at first was purely technical, and the way Vettel managed the lead after his own pit stop was solid. The dominant Vettel  from the times of Red Bull is back, a role he hadn’t been able to play since 2013. The other piece of the puzzle was Verstappen, blocking Hamilton lap after lap, to which Mercedes hadn’t planned for.

A warning for Mercedes

It is just the first race of a long Grand Prix, with everything ahead of the teams but a warning has been issued to Mercedes. They now know they are going to have to give something extra. These first days in Australia have also witnessed the healthy comeback of ex-retired Felipe Massa (sixth) and the confirmation of Toro Rosso’s good form (six points for Sainz and Kvyat).

Not such good sensations for other promising teams such as Renault which ended up with Hulkenberg getting no points and Palmer off the track. And better than expected (although only the worse was expected of them) for McLaren: “the best race of my life” Fernando Alonso said at the end; again, a personal achievement to try and keep a terrible vehicle (and not just because of its engine) in the points. When he was almost there, a suspension failure left him stranded on the track  just three laps away from the finish line.  The ones who did finish the race even if in the last positions included Vandoorne and Giovinazzi’s Sauber. Honda has promised a ‘super engine’ for May, but what until then?