What are Jorge Lorenzo’s issues with Honda? This is the questions on all of the fans’ minds as well as on the heads of his own team members. We are one third through the calendar and he doesn’t seem to have taken to his new machine yet.

There are many hypotheses as to the reasons for his poor performance: The bike is too small; he is uncomfortable; doesn’t suit his driving style; it doesn’t feel natural; the deposit and seat are awkward; his training method is inadequate; he is too old; he is demotivated… 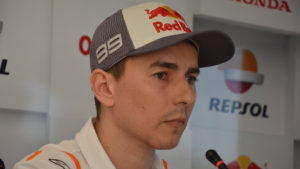 These are just some of the paddock’s rumours that attempt to explain the very difficult situation that the three-time MotoGP world champion is going through. The truth is that for whatever reason, the Spaniard is not at ease with the Japanese bike and under those circumstances, no one could perform.

One just has to look at the standings to realise the seriousness of the problem. The Honda #99 is in the fifteenth positon with just 19 points; 121 points less than his teammate and current season leader Marc Marquez.

A eight place in France was his best result so far. His lowest point came in Italy, where he finished in the seventeenth position. Right after that, he travelled to the Honda factory in Japan where he met with the hose engineers in an attempt to understand the issues that are preventing him from being competitive…and try to solve them. 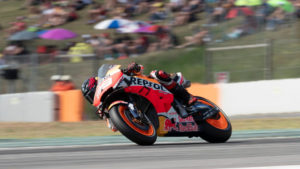 Whatever the reason, Lorenzo is not finding his footing since he left Yamaha. After he left the Iwata manufacturers it took him a year and a half to tame his new Ducati. It was only then that he managed a couple of victories. And now he is facing the same, or perhaps an even greater challenge.

A bike that only Marquez is able to control

One of the main Jorge Lorenzo’s issues with Honda seems to have with the Japanese missile, and a difficult one to solve, has to do with its size. Originally designed for Marc Marquez’ height and shape, the RC213V seems too small and too high for the Spaniard’s anatomy.

As for its specific elements, both the seat and the tank are not in the optimal position for Lorenzo. As a result, he is forced into a very unnatural driving position at the cost of great physical strain.

The Honda has been developed for Marquez’ very own driving style, which is radically different from that of Jorge, a lot more natural and less aggressive. Only a tight rope walker such as Marquez has the touch to tame the Japanese beast.

All of this means that Jorge has been forced to completely change his driving style, particularly during braking and in turns. As he himself has explained: “It is like learning to drive all over again”.

Presented with this dilemma, Lorenzo has made it his mission to transform the Honda into a more versatile machine, good for any pilot that takes it on, and not just for one as it currently is.

Marquez is, as expected, in disagreement with this initiative. He hasn’t been very happy either about Jorge’s trip to the land of the rising sun. Why change anything if he is dominating the championship with an iron fist? Here is one of the Jorge Lorenzo’s issues with Honda

The Japanese mentality has also been an issue for Jorge. Despite having agreed to the Spaniard’s technical requests, the Japanese are not very comfortable with change. 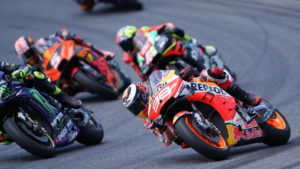 At this point in the season, they are not going to design a whole new chassis for Lorenzo. Not so much because they cannot do it, but because they don’t need to. The leader of the standings is among their ranks and he is most likely going to take his fourth consecutive title with them.

“We cannot change the bike just because one pilot is not adjusting well to it, particularly when it is the same bike that is winning” – declared team’s chief, Alberto Puig. Being so Marquez-dependent, however, could potentially turn against Honda as they are putting all of their eggs in one basket.

The Japanese firm has also shown its discontent with Lorenzo’s performance. Everyone knows what the Japanese think about the MotoGP World Championship: They have the winning machines and if you don’t believe it, ask Valentino Rossi.