Alvaro Bautista, who is replacing injured Jorge Lorenzo, gave a sensational performance coming very close to a podium position. The most notorious absence on the podium was that of Marc Marquez (Honda), who had to retire after being hit from behind by a blazing Johan Zarco.

With this victory at the Australian MotoGP Grand Prix, Viñales has given a much-needed confidence boost to both the Japanese manufacturer, and to himself. This is the Catalan driver’s fifth podium of the season but he hadn’t had a victory since Le Mans 2017, that is, 28 races ago.

His nightmare started last season after winning three of the first five races and taking the top spot in the standings.  After his extensive draught period, the pilot from Figueras has finally seen the light dispelling any possible doubt about his future and lifting a great weight off his shoulders.

The start of the action

The battle for the lead at the Australian MotoGP Grand Prix was fierce from the start right up to the first turn at the Philip Island circuit. Those at the head were particularly ruthless, delighting the crowd with a number of late-breaking manoeuvres, alternating the lead several times, sneaking through, etc.

The pole holder slipped back five positions and there were several notorious mistakes such as those of Zarco and Viñales, both of whom started on the first row. In sum, complete mayhem an the Australian MotoGP Grand Prix!

After the second lap, however, the championship’s top dogs, Marquez and Dovizioso, asserted their superiority. The Spanish and Italian pilots took the lead of a very crowded front pack which included Miller, Iannone, Rossi, Zarco, Bautista, Viñales and Rins.

Marquez out after Zarco touches him

The first drama came in on the fifth lap when Zarco touched the rear of Marquez’ Honda with his front wheel at the Australian MotoGP Grand Prix. They were battling it out for the third position at the time. The Frenchman fell over but fortunately didn’t sustain any injury and the seven-time champion had to retire on the following lap. The Spaniard, ko to the box.

It seems as if Marquez is under a strange curse this being the third time he has to retire at the Australian MotoGP Grand Prix after being crowned World Champion in Motegi.  A curious fate to exactly followed the events of 2014 and 2016. 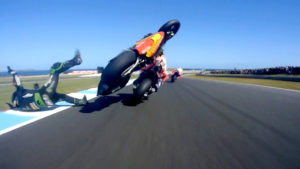 This is Marquez’ third zero-point result of the season threatening Honda’s Constructor’s Championship bid, even more so as Dani Pedrosa also fell over and had to retire on the 11th turn at the Australian MotoGP Grand Prix.

Neither of the big names of the Japanese brand, Marquez, Pedrosa and Crutchlow, has added any point this week. Currently, Honda is 39 points ahead of Ducati.

Maverick takes the leadership of the race

Back on to the race and with Marquez out of the picture, Viñales took the leadership at the Australian MotoGP Grand Prix, setting a fast  in an attempt to leave Dovizioso, Rossi and Iannone behind, all of whom were fighting for a second position.

Behind them, Bautista was showing great skill and energy onboard Lorenzo’s official Ducati, who is rumoured to make a come back for the Malaysian GP.

Viñales was the only one of the favourite contenders who opted for a soft front tyre and the bet  off as he managed to break away from the others. At the eleventh turn he had already got a second off Rossi and seven laps after that, he was more than three seconds ahead of Dovizioso, Bautista, Iannone and Rossi. Meanwhile, Rins and Miller were trying to catch up with the Italian pilot.

From then onwards Viñales had to pace himself knowing that there was not much life left in his front tyre. With just three laps to go, Iannone took the second position and managed to get a second closer to Viñales. At the start of the last lap, however, Maverick still had a 1.8-second advantage and he crossed the checkered flag of the Australian MotoGP Grand Prix with ease.

Behind him finished Iannone and Dovizioso who had just left number four, Bautista behind by 1.5 seconds.  Further down came Alex Rins and Valentino Rossi in sixth and seventh place respectively at the Australian MotoGP Grand Prix.

With Marquez already crowned World Champion, the battle for the second place continues with Dovizioso at the lead with 210 points, 15 more than Rossi (195). That is exactly the same distance between the Yamaha #46 and his team-mate Viñales (180), who is now fourth in the standings. The fifth and sixth positions are currently occupied by Crutchlow (148) and Petrucci (137).