13 13 Apr, 2019
The first Formula 1 race
This weekend’s 2019 Chinese Grand Prix will mark the 1,000th race Formula 1 World Championship race, a competition whose origins date back to the middle of the 20th century. When it was first born, the F1 Championship tour had a total of seven stops: England, Monaco, Indianapolis, Switzerland, Belgium, France and Italy.
The inaugural round, the first Formula 1 race, was the British GP. It was celebrated on May the 13th 1950 at a former military airfield in Silverstone, a track used during the Second World War by the bombers of the Royal Air Force (RAF).

The British people, notorious for their passion for cars, flocked to watch the most important sporting and social event of the time. the first Formula 1 race was attended by more than one hundred thousand spectators, including many high-society members.

The bourgeoisie, the nobility and the national and foreign monarchies were represented in the stands … and on the asphalt. The most illustrious attendants at the first Formula 1 race were British King George VI, accompanied by his daughters Elizabeth II, current Queen of England, and Princess Margaret.

A grid with 50-year-old drivers

The heterogeneous list of entries to the British Grand Prix of 1950 brought together 26 drivers from 9 different nationalities and with an average age of 39. The youngest driver, Geoffrey Crossley was 29, the rest were mostly veterans such as Louis Chiron, Philippe Etancelin and Luigi Fagioli, all of them over 50. 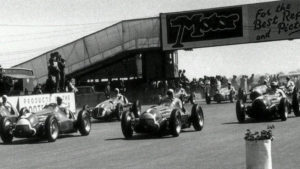 Other participants, such as Nino Farina and Juan Manuel Fangio, were 43 and 38, respectively, at the first Formula 1 race. Things have changed considerably in this respect with drivers getting increasingly younger over the years.

The testing sessions of the first Formula 1 race began on the 11th of May and the weekend continued on the 12th with the qualifying round under an excellent atmosphere. The almighty Alfa Romeos stood out from the rest right from the start. 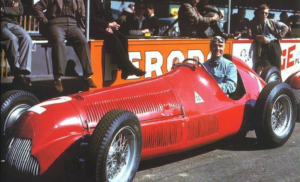 Their extraordinary line-up included Juan Manuel Fangio, Giuseppe ‘Nino’ Farina, Luigi Fagioli and local driver Reg Parnell. The Italian single-seaters were, together with the French Talbots, the only ones belonging to an official team.
” ]
As it was to be expected, the superiority of the Italian team meant they got the best positions in qualifying. The ‘Alfetta’ 158 took the first four places. Farina got the pole position with a time of 1: 50.8 seconds, ahead of his teammates Fagioli (+0.2), Fangio (+0.4) and Parnell (+1.4). The royal driver, Prince Bira of Siam, took fifth place at the wheel of a Maserati 4CLT / 48.

Dominance of the Italians and victory of Farina

The Alfa Romeos became the undisputable favourites after having demonstrated their overwhelming superiority during qualifying. They lived up to the expectations. After the green light, Farina, Fagioli and Fangio fought a fierce battle for glory.
The Argentine rider, however, had to retire on lap 62 due to a mechanical problem. The misfortune of ‘El Chueco‘ left the road open to Farina. 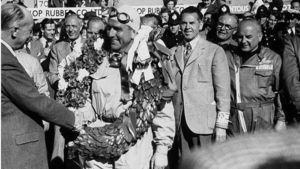 The Italian champion led during 63 of the 70 laps that made up the race and took the victory with a time of 2 hours 13 minutes and 23.6 seconds. 2.6 seconds after him Fagioli crossed the finish line. The withdrawal of the Argentine driver allowed Parnell to take the third step of the podium fifty-six seconds after the winner very much to the furore of the public in the stadium.
Farina collected nine points with his triumph. That year he won the competition with a total of 30 points after also winning in Switzerland and Italy and the Championship. Fangio was second with 27 points.
‘The first Formula 1 race’ Imaes: Wikipedia & F1.