Yesterday marked the 35th anniversary of Ayrton Senna’s memorable performance at the 1984 Monaco Grand Prix. The sixth race of that season will always be remembered for the Brazilian driver’s amazing feat, even though, in the end, he finished in second position in one of the best Formula 1 races.

On that unforgettable 3rd of June, the rookie from São Paulo gave a memorable driving masterclass under a torrential downpour. The streets of the Principality, one of the most dangerous and demanding layouts of the Championship, turned into a hellish deathtrap. The inexperienced driver, however, was not only up to the challenge, but amazed the world with his talent and courage.

An inexperienced driver, an unruly vehicle, and a flooded circuit

In order to properly gauge the heroic value of Ayrton Senna’s performance, it must be born in mind that cars at the time lacked any sort of electronic aid as well as traction systems. The manual gearbox meant drivers had to continually use the right hand to change gears.

There was, of course, no power steering and thus the physical effort required for a GP was a lot greater than today. In addition to that, power was delivered by turboprop engines, which meant drivers needed to step on the accelerator with neurosurgeon precision so as to not end up against a wall. Finally, the barriers of the Principality were a constant threat.

It was under those circumstances that Ayrton Senna arrived at his sixth ever Formula 1 race. As a working tool, he had the modest Toleman-Hart TG184. As with any racing car of the time, its wild 600hp was difficult to tame on any track, let alone Monaco.

At the official qualifying session, Ayrton Senna offered a glimpse of what was to come. He got the thirteenth fastest time, five places above and almost a second over his teammate. But the main course was only twenty-four hours away.

The downpour on race day

Sunday woke to a fine drizzle which grew in intensity as the morning progressed. By the start of the race, a heavy downpour was falling on the circuit. The situation was incredibly complex. Officials had to get the asphalt inside of the tunnel wet for it to match the conditions of the rest of the Monegasque track. 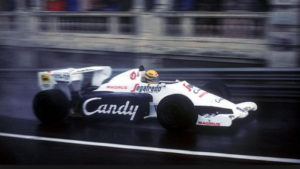 The race started under this challenging weather and very demanding technical circumstances. Alain Prost started in pole position on board his powerful McLaren but soon lost it to the Lotus-Renault of Nigel Mansell. All the excitement, however, was taken place a bit further back.

The Brazilian rookie was passing his rivals with surprising ease. His rare confidence and skill made up for his obvious mechanical inferiority. The way he drove, just millimetres away from the railings, was astonishing!

On lap fifteen Mansell went out of action. He had lost control of his Lotus and with it, any chance of success. At least he was able to witness both Senna’s performance as well as that of another surprising debutant: Stefan Bellof. Taking advantage of the Briton’s collision, both McLarens of Prost and Niki Lauda took the lead – in that order -.

Then something extraordinary happened. The Brazilian rookie came to the tail of the then second classified, the McLaren of the Austrian and twice world champion Nikki Lauda whom, by the way, would get his third crown on that same season. After a vibrant chase and thanks to an impressive overtake on the outside, Senna finally passed the Viennese in Santa Devota.

Prost and a controversial decision

Senna had almost completed his magical comeback all the way up to the lead. His relentless pace meant he had gained between two and three seconds and had set the fastest lap of the race. On lap thirty he had already established visual contact with Prost who was approximately 4.5 seconds ahead of him.

Before being caught up by the Brazilian, the French driver raised his arms to complain about the state of the tarmac. Race director Jackie Ickx didn’t acknowledge the Frenchman’s complains at first. But in the next lap, he finally gave in to the insistent signals of his compatriot, and personal friend of FIA President Jean Marie Balestre.

The Brazilian driver, enraged by the Frenchman’s manoeuvre, overtook him on the finish line and performed a victory lap just as if he had won the race. The triumph, however, belonged to Prost. Regulations established that after a red flag, the winner was the driver who had crossed the finish line in the first position on the previous lap.

On the podium Senna kept a sombre expression of disappointment knowing he had been wronged and robbed of what should have been his first Formula 1 victory. From then on he was a regular on the podium but winning was all it mattered for him, in his famous words: “The second is the first of the losers. “

A trademark performance for Senna

Despite that bitter second place, the bravery of ‘Beco‘ didn’t go unnoticed as the paddock completely surrendered to his extraordinary performance. James Hunt, F1 champion in 1976 and British commentator on the day, declared that the boy had what it took to win the title. And he wasn’t wrong. 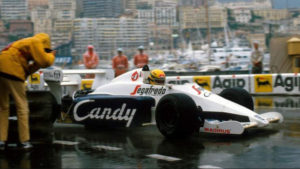 Senna was able to master his racing car in the most appalling of conditions, with the track resembling a pool which made his vehicle slid like on an ice rink. On top of that, he was able to set a pace well above any of his more experienced rivals and this was, obviously, his first time competing in Monte Carlo. On that day, he demonstrated he could overcome not only the mechanical limits of his car but also the laws of physics.

And that was how the legend of Ayrton Senna first came to be. Now, 25 years after his death, Senna continues to inspire generations of new pilots as well as current legends such as Lewis Hamilton.