The Spanish driver Dani Sordo will stay with Hyundai for the 2019 World Rally Championship (WRC). The Korean team, which is said to be very satisfied with the Spaniard’s performance during 2018,  made the official announcement this week.

Sordo has not only renewed his contract with the Koreans but also increased his participation in 2019. Dani will take part in 10 races next season, three more than in 2018. He will only miss out on the Swedish, Finnish, British and Australian events.

This will be the 35-year-old’s fifth season with Hyundai, who hopes to continue growing as a racer within the Asian team. The news has settled the ongoing rumours regarding the Spaniard’s future.

The decision of the Asian squad (Hyundai Shell MObis WRT) comes after Sordo’s great performance during t2018. The Spanish driver finished just 13 points behind team-mate Andreas Mikkelsen, despite only taking part in half of the races in 2018 and Mikkelsen racing all throughout the year. 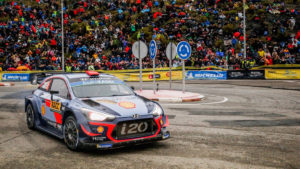 Thanks to his consistency and excellent rhythm he has scored points in five of his seven races. Also, despite having to retire in Monte Carlo, where he aspired to a podium position, he managed a fantastic second place in Mexico.

Later on, at Rally Corsica (France) he finished just out of the podium in the fourth position. In Argentina he was second. And finally, he came in fourth in Portugal and fifth in the Rally of Catalonia-Spain.

2019 belongs to Hyundai and Sordo

Dani Sordo will make his 2019 debut in January at Rally Monte Carlo. Later on, he will race in  Mexico, France, Argentina, Chile, Portugal, Italy, Germany and Turkey, only to finish at home in Spain.

Meanwhile, his partner, Thierry Neuville, second in 2018, will attempt another assault on Sebastien Ogier’s throne, which he has held for six whole years. The Belgian driver almost did it last season when the title only got decided at the last race in Spain. 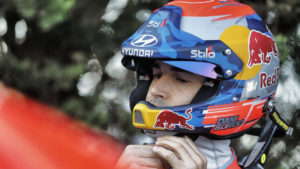 The fight between Ogier and Neuville is expected to continue in 2019, the latter attempting to overthrow the French monarch once again. The other two Hyundai drivers, Mikkelsen and Hayden Paddon, will have cover the rest of the Championship’s races, although it seems the latter might be given more chances than the other.

Sordo’s trajectory in the WRC

Dani Sordo arrived at the WRC under the wing of two-time World Rally Champion, Carlos Sainz. The successes of the young Spaniard caught the attention of the legendary veteran, who helped him get a seat at the Citroën C2 Super 1600 for the Junior World Rally Championship. The youngster did not disappoint and took a commanding victory.

After his success, the French team gave him an official seat next to Sébastien Loeb in 2007. Sordo paid the French team back by taking seven podiums that year, six in 2008 and finishing third in the 2009’s edition.

The year after, However, his performance became inconsistent and so he was replaced by the local hero at the time: Sébastien Ogier. He left the French team to join Mini but despite his good results, the German brand decided to withdraw their support and he had to abandon the Championship in 2012. 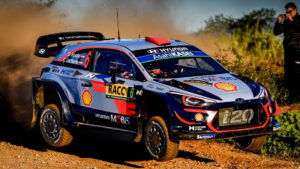 He returned to Citroën in a very complicated season both for himself and the French team. However, it partially mitigated their continuous disappointments by giving them a victory at the German Rally.

The 2014 season and his arrival at Hyundai marked a new stage for Dani Sordo, a sort of change of air and competing style. He took part in six Rallies on board the second of the i20 WRC.

Although the start of the year was marked by the numerous breakdowns, he managed to finish among the top five in three races, including a second place at the German Rally. He accrued 40 points in total and finished tenth in the standings. He proved his consistency by finishing in the top 6 in more than half of the races of 2015.

The icing on the cake was his Spanish podium. He got 89 points in total and an eighth position in the standings. He also sealed a great 2016 season on board the Hyundai i20 coming second in Germany and Spain and fifth overall with 130 points. Once again he showed his reliability behind the wheel in 2017, finishing sixth in the championship with 95 points.