by M.C. – photo: dakar.com | The Dakar Rally is in itself a mythical race and this 40th edition, which took place between the 6th and the 20th of January this year, will remain in everyone’s memory as one of the toughest so far in South America. Two names will also be covered in glory for years to come as the winners of this hardest of tests: Sainz and Walkner; the Spaniard Carlos Sainz, with co-pilot Lucas Cruz (Peugeot Team) in cars; and Austrian Matthias Walkner (KTM Factory Racing) on two wheels. For Sainz this is his second Tuareg, after winning in 2010, and a record-breaking victory at the same time as the oldest driver (he is 55 years old) to ever win the competition. It is a first for Walkner.

Both champions were part of the initial favourites’ list but many of the names they shared that honour with were forced into early retirement. In cars we had to bid farewell to Nani Roma (Mini) and Sebastien Loeb (Peugeot Team) in the first half of the race, and closer to the end, on the last but one day of the competition, Bernhard Ten Brinke (Toyota) had to say goodbye. In motorbikes both Sam Sunderland (KTM) and Adrien Van Beveren (Yamaha) were forced to withdraw after suffering two serious accidents and Joan Barreda (Honda), was unable to continue after carrying an injury for several days. The French Cyril Despres (Peugeot) managed to finish the race and support his team-mates Sainz and Stephane Peterhansel at the same time, but he was out of the fight for victory by the half waypoint.

It was none other that Monsieur Dakar himself (Peterhansel) that provided a lot of the excitement as he leaded the rally for several days up until stage six to La Paz, when his car broke-down loosing almost two hours as a result (1h 47’ 56”). He carried on trying to make up some of the lost time and managed to win a few stages but when he was very near achieving a second position he suffered another breakdown and lost any chance of podium. He none the less managed a fourth position. Worth mentioning are also the efforts of Toyota’s Qatari driver Nasser Al-Attiyah, who despite not posing a serious threat until the middle of the race, kept a steady and determined progress winning four stages as a result. He was then a serious candidate for the title right until the end and ended up with a well deserved silver ‘Tuareg’.

In motorbikes there are other achievements worth mentioning besides Walkers’ winning consistency and Sunderland, Van Beveren and Barreda’s (all retired) admirable skill. Notably the French Antoine Meo’s two stage victories and Australian Toby Price’s three stage victories and third podium position. But most remarkable is Argentinian Kevin Benavides’ second place at this his second ever Dakar Rally.

The most African Dakar in Latin America, as it has come to be known by many, has left a great number of casualties along the way; 144 is the official number. In other words, from the 335 vehicles that started in Lima only 191 crossed the finish line in Cordoba (Argentina); that is, only 57% have made the dream off in is hing come true. The particular harshness of this edition, with ex-pilot Marc Coma as route director, has been praised by most pilots, which have felt it “recovers the Dakar spirit”. 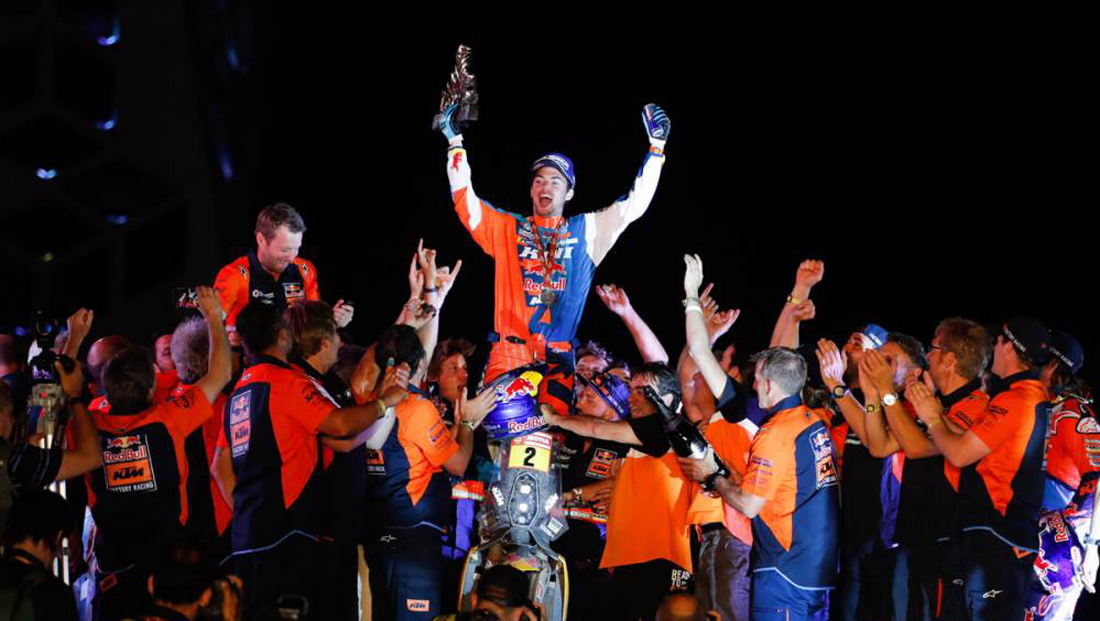