Hyundai Motorsport announced on Tuesday its line-up for Rally Finland, nineth 2019 WRC Calendar, which is to take place from the 1st to the 4th of August.

The South Korean squad will count with its main man, Thierry Neuville, as well as Norwegian pilot Andreas Mikkelsen but neither Sebastien Loeb nor Dani Sordo, winner of last Sardinian Rally, will race this time for the team. 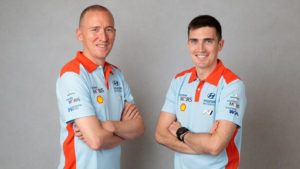 Up until now, both drivers had shared the wheel of the third i20 Coupe WRC this season. According to rumours, however, neither of them felt particularly inclined to take part in the Scandinavian rally.

Surprisingly, the drivers chosen to replace the French-Spanish couple in Finland are no others than Irish Craig Breen and co-pilot Paul Nagle. The former lost his seat in Citroën last season and since then he has been working hard with the only objective of returning to the WRC.
“

Breen’s extensive experience at the Rally Finland, of which he has been part in nine occasions, has been key in his selection. The 29-year-old Irishman is completely accustomed to the raid and was third in 2016 with a DS3 WRC.

“I am delighted to have the chance of joining Hyundai Motorsport for Rally Finland and return to the WRC” (…) “It’s been a long and patient wait, having to watch everyone else drive this year, I am honoured to have this one-off opportunity with Paul as my co-driver.” Breen declared in a team’s press release.

Undoubtedly the Irish driver arrives at Rally Finland, one of his favourites, full of enthusiasm and in great spirits. He will also be racing with his lucky number.

“Finland is the rally I’ve done most in the WRC so I hope I can bring something to the team” (…) “I am getting plenty of seat time before Finland. It will remain a challenge but one I am ready to grasp with both hands” (…) I’ll be competing with the #42, a number I’ve raced with since my first year in karting in 1998, and that has always been very lucky. Let’s hope it remains that way.” – Continued Breen-.

Hyundai has also signed Breen to join Mikkelsen at the Estonian Rally which starts on the 12th of July so that he has a chance to get used to the i20 and get to know the team a bit better.

Hyundai Motorsport’s director, Andrea Adamo, has spoken about Craig’s signing in the following terms: “The Rally Finland is a very particular race which requires of a greater focus than any other in the WRC calendar. It is a great challenge for both teams and drivers”. 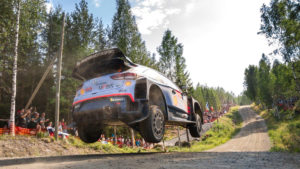 “With the season coming to a crucial phase and with all constructors at such an equal level, we have decided to bring Craig Breen to our Finnish line-up” (…) “He has demonstrated his class at this event in the past and has a lot of experience, which will be invaluable to us.” – concluded the top chief of the Asian team-.

The team from Alzenau currently leads the standings with 44 points more than Toyota after their double podium (Sordo’s win and Mikkelsen’s third place) in Sardinia. They are hoping to increase their advantage at the Scandinavian rally.