14 14 Aug, 2019
Motorsport History, Name of 'Grand Prix'
Long before Formula 1 races was born, car races were already referred to as the Grand Prix of… Those two magic words synthesize the competitive spirit of Formula 1 from its very origins since every single race in Formula 1 has always been called a Grand Prix.

But… what is the story behind those two words? Or, in other words, what is the origin of that universal phrase that we give to the most important two and four-wheel racing competitions around the world?

It all began at the end of the 19th century, more specifically in 1886, where a new means of transportation that would forever change the way we move was invented. The invention is attributed to the German Karl Benz, and it received the name of car. 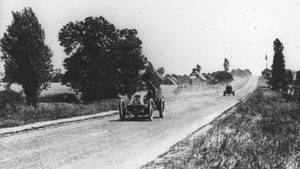 Almost immediately, the strange new mechanical device aroused the interest of Benz’ compatriots and shortly after, at the beginning of the 20th century, the four-wheel fever had spread throughout Europe.

It is not surprising as Europeans had suddenly been presented with a much more efficient and faster mode of transport.

The French automotive industry … and the speed fever

Aware of the business opportunities posed by the new invention, the pioneer French automotive industry, spurred the desire of its countrymen for the four-wheel contraption. 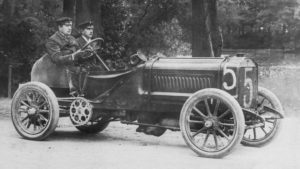 Soon, the inhabitants of Karl Benz’ neighbouring country would become enthusiastic car drivers. But beyond the mundane practicalities for which the car was initially conceived, enthusiasts fell in love with its more exciting virtue: speed.

And what better way to measure speed and driving skill than against an adversary? The fervour of racing soon took over the nation of pâte and champagne and shortly after the French began hosting the first car races.

Although unimaginably reckless by today’s standards, those first races were held on public roads which were open to ordinary traffic. The popularity and proliferation of these events, together with the virtually non-existent security measures, resulted in numerous and fatal accidents.

Tragically, the number of victims among both drivers and spectators kept growing. At the Paris-Madrid race of 1903, Marcel Renault, brother of Louis and Fernand, lost his life.

Only four years earlier, the three young brothers had started the car business that still carries their family name.

A decision that would forever change motor racing

Face with the increasing accident rates at racing events, the French Automobile Club (ACF) adopted a measure that would forever change the direction of the new sport.

The Count of Dion founded the ACF in 1895, and eleven years later he organised a race that would run on public roads in the area of Le Mans.

To reduce risks during the event, the roads were closed off to ordinary traffic for the first time. It was an extraordinary decision at the time and the start of an ever-increasing pursuit of safety in the sport.

The name Grand Prix is born

That was the first time in history that a race would receive that name. The French words Grand Prix stuck and since was used to name races across the world.

The winner of that first legendary race, which congregated 32 cars from 12 different makers, was Ferenc Szisz. The Hungarian driver and his Renault completed the 120 km of the triangular layout around Le Mans in 32 minutes less than the Italian Felice Nazzaro (Fiat).

Szisz was awarded 45,000 French francs for his epic achievement and victory, the equivalent to the price of 13 kilograms of gold at the time.

From that moment on, all races in the French nation, as well as in every other corner of the Old Continent, received the name Grand Prix. Not all subsequent winners, however, were presented with such a large prize.

The new denomination became so popular that four decades after it was first conceived it was adopted by the Formula 1 World Championship at its inception in 1950.

But that was not all. The name also made the leap to other motorsport disciplines such as the Motorcycle World Championship and IndyCar, to name but a few.