The 2019 Dutch MotoGP travels this weekend (28th to 30th of June) to the Assen circuit, the Cathedral of premium class. Marc Marquez arrives at the ninth appointment of the season as the clear favourite to take the win. 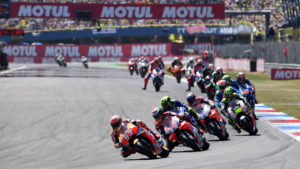 After his cosy victory in Catalunya, the Spaniard stands a whole 37 points ahead of Andrea Dovizioso and 39 ahead of Alex Rins. Both Dovi and Rins, however, together with Rossi, will be eager to make up for Barcelona, where the wrong manoeuvre from Jorge Lorenzo sent the three of them out of the game.

Everything points to the Honda #93 winning again at the 2019 Dutch MotoGP just as he did a year ago. Marquez is in a great state of form. He and his machine are a nearly impossible to beat combination;  at least judging by his most recent results.

The Spaniard has won three of the last four races (Jerez, Le Mans and Barcelona) and has finished second in the other one (Mugello). The champion from Cervera, however, is not expected to take any unnecessary risk as only a week after Holland comes the German MotoGP.

Regarding his teammate, Jorge Lorenzo, things seem to have improved slightly after his shameful fall in Montmelo. The other Spaniard continues with his arduous process of adaptation to the RC213V.

Lorenzo himself acknowledges having experienced better sensations in Barcelona, where he even saw himself fighting for the lead. It seems that the improvements that came out of his trip to the Japanese factory might have had some positive effects.

He appears a bit more comfortable riding the wild Japanese machine. In Spain, Lorenzo also tried out some different parts in his bike which could help him gain a bit more confidence.

The race in the land of tulips is, therefore, a crucial test for Lorenzo. It is his chance to demonstrate that the presumed improvements are real and that there is light at the end of the tunnel. Historically, the Dutch one has never been a kind circuit to Lorenzo, but statistics are there to be broken.

The Spaniard has only won in Assen in MotoGP on one occasion in 2010 with Yamaha. Incidentally, the team of the golden wing will be celebrating its 25ht anniversary in MotoGP this weekendat at the 2019 Dutch MotoGP.

Even worse than Lorenzo has been Dovi’s luck in Assen historically speaking. The #4 from Ducati has never had a MotoGP victory in Holland.

This year he arrives at the 2019 Dutch MotoGP in desperate need of a good result, particularly after the three consecutive podiums – third in France and Catalunya and a win in Italy – of his teammate Danilo Petrucci.

Petrucci’s support role for Dovizioso could be key if the latter wants to finally beat Marquez. In any case, ‘Petrux’ is going strong. His renewal with the team from Borgo Panigale for 2020, however,  is still in the air.

Rossi & Yamaha: The kings of ‘The Cathedral’

Always very competitive in the Netherlands, the #46 from Tavulia arrives at the 2019 Dutch MotoGP with 8 triumphs – 7 with Yamaha and 1 with Honda – backing him up.

He actually holds the record for the pilot with the most MotoGP victories in Assen and he again will be at the lead this weekend. Meanwhile, Maverick Viñales will aim for at least the second position that he got in 2018.

The pilot from Rosas is all the way down in 11th place in the standings with just 40 points, 32 less than his Italian teammate. He must wake up immediately.

The Yamaha satellites of Fabio Quartararo and, to a lesser extent, that of Franco Morbidelli are also likely to put up a good fight this weekend.

Rins & Suzuki after their 2nd triumph

After his breathtaking come back to the edge of a podium position in Catalunya, Alex Rins arrives at the 2019 Dutch MotoGP with every intention of improving his outcome.

This time he won’t need to climb back positions to be in the head of the race but will be part of the lead from the start. The Spaniard could surprise everyone in Assen, his driving style and bike are perfectly suited for this type of track.