Simond Pagenaud has won the 103rd edition of the Indianapolis 500 held on Sunday at the legendary oval in Indiana.

The French driver from Team Penske, who started from pole position, managed to impose himself on a final sprint against Alexander Rossi, after a very tight and vibrant 13-lap duel.

The Frenchman has delivered the 18th title to Team Penske, and as tradition dictates, will see his face engraved in the beautiful Borg-Warner trophy. 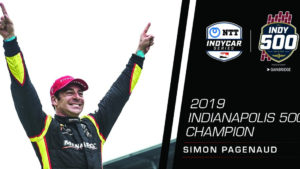 Pole holder Pagenaud kept the leading position from the start and held it during the first part of the race setting the rhythm of the race.

The Chevrolets from Penske and Carpenter set the pace when Colton Herta had to retire after suffering some issues with his gearbox triggering the first yellow flag. 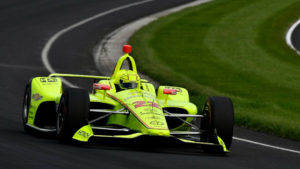 Shortly after, the second yellow flag came out after Kyle Kaiser’s accident. The driver who took Fernando Alonso’s spot crashed against the wall in turn 74.

At around the same time, some other important contenders had to say goodbye to their hopes of glory. Meanwhile, Helio Castroneves crashed against Davidson in the pit lane receiving a drive-through penalty and having to change his front wing as a result of the impact. The incident meant he lost three laps and all chances of a fourth triumph.

Takuma Sato and Marco Andretti also had their share of drama. The latter, unable to find the right balance with his car, had to pit on the seventh lap to have the configuration of the vehicle modified.

The Japanese 2017 champion was forced to make an additional stop after changing his tires, losing two laps as a result, but then he put up a strong drive to climb back up to third again.

Things started to heat up after a clash between Sebastian Bourdais and Graham Rahal at 21 laps to the end. Fortunately, both drivers came out unharmed but the red flag was waved.

The tension was mounting on the asphalt with all the cars gathered behind the pace car. As this finally went the action began and a new race started with a large group of cars battling it out intensely for 187 laps. It was now all or nothing in the quest to glory at the legendary oval.

From that moment on, the fight between Rossi and Pagenaud became an electrifying head to head, both heavyweights exchanging blows and alternating the lead of the race. There was no truce as both champions gave it all they had for glory.

Suddenly an unexpected guest made an appearance. The competitive Japanese driver, Sato, became a privileged spectator of the fierce war, emerging from behind the pack and having climbed two full laps since the first stop. A little below, Josef Newgarden and Ed Carpenter still harbored hopes for success at the Brickyard.

Rossi doesn´t give up

After recovering from a mishap on the part of his team (Andretti) in the pits, Rossi came back for the final showdown. The mechanics at his garage had had issues with the refueling hose, nearly ruining his chances of success.

Pulling all his experience and know-how together, the American driver managed to take the lead after the pace car at just two laps from the checkered flag but, in the end, he couldn’t do anything against the sheer power of the Frenchman’s Chevrolet.

Taking advantage of this mechanical superiority, Pagenaud recovered the first position before the last lap and kept it to the end of the Indianapolis 500. The next we saw was the Frenchman drinking the champion’s milk. Congratulations!