RallyWRC 2021: UK Rally to be replaced by Ypres Rally in Belgium 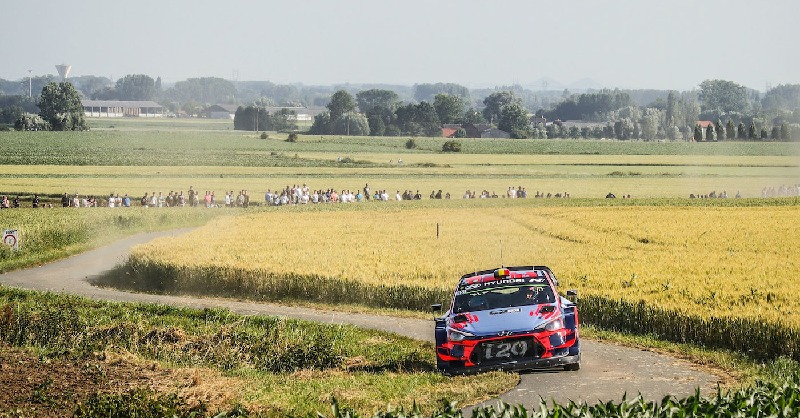 Any hope by WRC organizers of leaving the COVID-19’s setbacks an upheaval of 2020 behind and returning to normalcy in 2021 has been short-lived.

Just seven days into the new year and with barely two weeks left for the start of the WRC in Montecarlo (Jan 21-24), the season’s calendar has suffered its first major shake-up.

The British appointment has been cancelled for the second year in a row due to the persistent rate of infection of the coronavirus pandemic. Its questionable financial viability, as well as the general fear of the disease, have meant Northern Ireland, the last remaining UK candidate to celebrate the Rally, has withdrawn its candidacy.
The international competition will not visit the British Isles for the second consecutive season. This is an unprecedented loss for the United Kingdom and its well-established presence in all international ‘four-wheel racing’ competitions.
Shocking as it is, the news has not come as a surprise since the UK’s withdrawal from the calendar has been on the table for several days now. Aware of the fragility of the British situation, WRC organisers already had a replacement at the ready; the Belgian Ypres Rally.
“Following the cancellation of the rally at the end of October, we remained in close contact with the FIA and WRC Promoter, emphasising that our event was ready to take its place on the WRC calendar,” said Alain Penasse, President of Club Superstage.
“Our employees had proved that they could switch quickly and organise a WRC event at short notice. We will be able to welcome the FIA World Rally Championship in Ypres for the first time in mid-August! Broadly speaking, we will use last year’s format again. This was clearly appreciated by the participants, as the registration list for the 2020 edition looked impressive with 140 teams registered“.

Following the row of cancellations that devastated last year’s championship, the Ypres was given the penultimate slot of 2020. The high rate of infections in the European country, however, meant this also had to be cancelled.

Barely two months after having to make that painful decision, Belgium gets a second chance. This Friday it finally became official that Belgium will be hosting a World Rally Championship race in August for the first time.

At least, the effort and dedication of the Superstage Club members as well as the dozens of volunteers, will not have been in vain. Initially, the ‘Renties Ypres Rally Belgium’ was pencilled down as a backup event for 2021 and now it has fulfilled its job with a firm place in the 2021 WRC calendar.

This is a historical occasion for the passionate Belgian fanbase. Their national rally has been going from 1965 and its popularity will grow even larger by the presence of local hero Thierry Neuville, 2020 Monte-Carlo winner, driving for Hyundai Motorsport.

Although the ‘Renties Ypres Rallye’ is traditionally held at the end of June, as a round of the 2021 World Rally Championship, it will take place in August.

Undoubtedly, the arriving of the WRC in Ypres next August could be a big boost for the country’s tourism industry and help in healing the local economy, which has been badly hit by the COVID-19 pandemic.

“Of course we had to take into account the other dates on the FIA WRC 2021 calendar. In August we will replace the UK round. We also had to take into account the availability of the market in Ypres and the possibilities at the Spa-Francorchamps circuit, where the GP Formula 1 will be held at the end of August. That’s why mid-August seems ideal,” concludes Alain Penasse.

The enormous interest for the Renties Ypres Rally Belgium shown by fans around the world just two months ago would have undoubtedly contributed to making this dream come true.

“The tourism and hospitality sector has been severely hit by the Covid pandemic. By bringing the World Championship to Ypres, the Renties Ypres Rally Belgium will give a tremendous boost to the hospitality and tourism sector in the region”.
“Now that vaccinations are starting in our country, everyone hopes to be able to enjoy their regained freedom again this summer. This will certainly create a unique atmosphere on the Market Square in Ypres and along the special stages,” says Jan Huyghe, director of Club Superstage.

Now all of those fans will have the opportunity to enjoy an unprecedented appointment with the Renties Ypres Rally Belgium this summer, an event with a bag load of tradition and passion and which always manages to conjure up a great atmosphere.

As for its setup, this is planned to maintain the three-day format initially planned for the cancelled WRC2020 event.