Honda HRC rider Jorge Lorenzo has confirmed he will compete in the next date of the Moto GP World Championship at the Italian Misano Circuit, which is taking place from the 13th to the 15th of September. Lorenzo broke the news on his twitter account: “Looking forward to the San Marino GP”

With that short message, the #93 has wanted to lay to rest the rumours that had spread over the last few days. Some of the specialised press, mostly from outside of Spain, had suggested he was to miss both the Italian race as well as the following appointment in Motorland Aragon, Spain. Some of those publications practically confirmed that the Spaniard would not be competing in Italy. 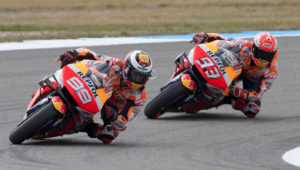 The pilot from Mallorca, however, seems to have blocked out all the media noise as he concentrates on getting fit and ready for the challenge. His priorities now are to be on top form in Misano and to not miss any other race. With that in mind, he is following a very thorough training programme which combines cycling, swimming and gym sessions.

What has originated the rumours?

Speculation started after what happened during last week’s test (29th and 30th of August) in the same circuit of Misano. On Thursday the 29th, Jorge Lorenzo had to quit after the morning tests, sore as he was from his back injury. He didn’t climb back up his RC213V on that day, nor the day after. After that, all sort of theories emerged and alarm bells started ringing.

Jorge Lorenzo himself explained what had happened afterwards. He could not stand the pain in his spine. It seems that after the 31 laps of the morning session he was left in unbearable pain. Under these circumstances, he made the decision to stop all further tests. 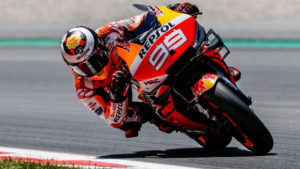 The three-time MotoGP champion was very clear and honest with the press as he climbed down his Japanese missile. “Unfortunately, I am not very happy with my back. I am feeling quite bad on the bike so we have decided to stop all tests and concentrate on being fit for the next race (Misano)”

The whole experience took him back to the British GP, where he resumed competing after almost two months convalescing from the double vertebral fracture that he suffered at the Dutch GP free training sessions on the 26th of June.

Jorge Lorenzo explained that his performance in England, where he had to concentrate all of his efforts in completing the race without crashing, and which himself has defined as a survival race, reversed his healing process. 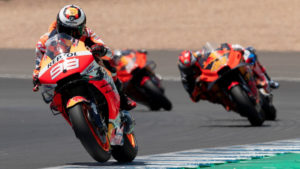 “After a great effort in Silverstone and having to do many laps in that situation, I suffered a lot after the race. On Monday and Tuesday, I was a bit better but I arrived here (Misano) in pain again”.

Jorge Lorenzo also explained how pushing himself to reach the finish line in Britain was extremely demanding for his whole physique and resulted in acute inflammation of his back:

“Today I felt a lot of pain when on the bike, more than in Silverstone. We finished the race but it meant there were more inflammation and pain after. I will probably need about 10-14 days to heal and to be able to arrive in Misano in good shape” – concluded Jorge Lorenzo.

57 days off and a lot of speculation about his future

Seeing what happened, some have feared that he might have come back into action too soon after his injury. Lorenzo was off convalescing for 57 days in which he missed four races: Holland, Germany, Czech Republic and Great Britain.

As if that wasn’t enough, the news broke during the summer holidays that he had held contacts with Ducati over the possibility of returning to the team from Borgo Panigale. The knowledge of those talks made his situation within the team slightly more awkward. 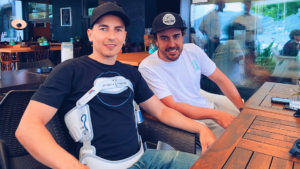 Other voices pointed to his possible retirement considering both the seriousness of his injuries from the Assen accident and the ongoing difficulties he has been having adapting to the Japanese bike. All of those circumstances and rumours increased the pressure on Lorenzo and might have been partly responsible for his decision to race in England.

Fortunately for the Spaniard, it seems all of this summer clouds are starting to dissipate. Despite the numerous shortcomings that he is suffering this season, the Spaniard has strengthened his commitment with the brand of the golden wing. 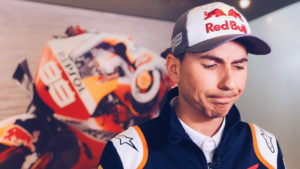 Lorenzo has confirmed that he intends to fulfil the contract that ties him to the Japanese manufacturer until 2021. In the short and middle terms, he will continue adapting to his bike in small, progressive steps, which will hopefully bring him closer and closer to the top positions.