The Spanish pilot Manu González (Manu ‘Gas’) has become the youngest champion in the history of motorcycling last Sunday, after winning the Supersport 300 category of the Superbike World Championship at just 17 years and 56 days of age. Throughout the championship, the young Manuel, nicknamed ‘Gas’ in the motorcycling world, has been breaking down all of the age records one by one; pole, podium, leadership and now title. 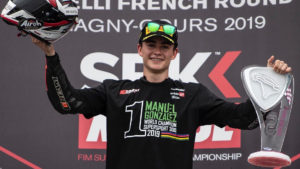 Did you expect at the beginning of the season to have such a historic success?

“I knew I could do well. From the first day with the Kawasaki, in fact, it was perfect, amazing, very fast. I also felt very comfortable with the team. The many podiums and the three victories just happened during the year. The truth is that I did not expect so much. My goal a priory was to get all of the podiums I could”.

What were the keys to getting the title?

“To win a race or a championship you have to be up there in every race, constantly fighting for the top positions. It’s no good just winning one race or getting one podium. Being so many pilots, so close together on the track, there is always an element of luck and you have to be able to place yourself in the right position. And then you need to work out what to do. Here (Supersport 300) being the fastest is not enough as it is in other categories such as MotoGP or Moto2. Competition here is so equal that, in addition to that, you need to know what to do on the last lap and the corners and to improvise”.

“I only had a ‘zero’ in one race (Donington Park) and I couldn’t even fight it. I finished within the top four in all of the other races: One fourth position, three second ones and three victories. I am the driver who has scored the most points. Although the other pilots have scored higher than me in some races, I have been up there in virtually every race”. 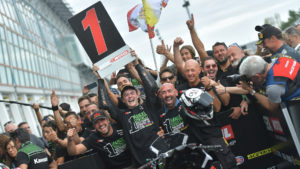 Talking about Donington Park; Did you think your title options were at risk after that fall?

“No. I thought I could continue, but the doctors told me that it wouldn’t be possible. I knew that Carrasco and Derrous would get closer, but since I was ahead of them by thirty points, I wasn’t very worried. In the end, they also fell and scored zero points. I, therefore, left England just as I came”.

At what point in the season you realised that you could actually win the championship?

“Before Donington’s race, in Misano and with that comfortable point lead over my rivals, it already seemed easier. From then on, I started thinking about how to manage that advantage. I no longer needed to win all of the remaining races”. 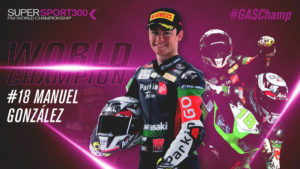 “Last year there was so much difference between the bikes that I always had to bring the Yamaha to its limit in order to be able to fight with the others. You always had to give the maximum without saving anything for later. In addition to that, you could not make any mistake because it could mean losing your chance of success. That level of demand has helped me to progress. That experience was useful this year because in 2019 I did not have to push it to the limit, or have to think constantly about getting into the rival’s slipstream”. 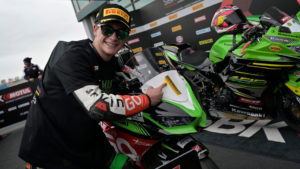 Regarding the future, Will you make the leap to Supersport 600 with Kawasaki in 2020?

“That is what the team wants and they are looking into it and holding talks with Kawasaki and Dorna to see if it is possible to get a bike and a place. But it will be very difficult because in 600 there is a very high level with very experienced teams that have been in the category for many years. We will try anyway. Let’s hope so. I hope to know something by Qatar (Last appointment on the calendar from the 24th to the 26th of Octobre)”.

As a pilot, do you prefer Alvaro Bautista or Jonathan Rea?

“The truth is that I like both of them a lot. I’ve always seen Álvaro in MotoGP and I think he’s an amazing rider. But this year, when I joined this team and worked with Fabian Foret, who also trains Rea, he has taught me a lot about Rea’s training and how he faces every race and everything he does. Getting to see the Briton’s work in-depth, I have come to think more positively about him. But if I had been with Bautista’s coach instead, he might have said the same things. I do not know”.