The M-Sport World Rally Team has issued a press release to confirm that their official driver Elfyn Evans will not be taking part in Rally Finland due to a back injury.

The Welshman injured his back at last week’s promotional Estonian Rally and following medical advice he has been deemed unfit to take part in the forthcoming ninth appointment of the World Rally Championship.

It seems that Elfyn Evans would have compressed his back after a heavy landing in Estonia, race which was won by local hero Ott Tänak. 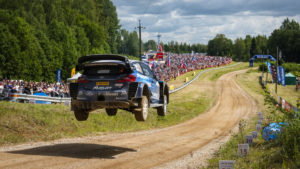 Despite finishing in fourth place, Evans has since been suffering from his back injury; so much so that the Doctor has advised rest and recommended that he gives Rally Finland a miss.

This is a hard blow for the Briton, who is currently fourth in the standings at 129 points of leader Sebastien Ogier, and who won’t be able to defend his team’s colours at a crucial rally. Evans and his team from Cumbria were second in Finland last year.

“I’m absolutely gutted to be missing Rally Finland, but we suffered a pretty heavy landing in Estonia and have been advised to sit it out and focus on making a full and quick recovery,” said a visibly disheartened Evans.

“It’s a hard one to take right now, but I have to trust the advice of the experts (…) I’ll now focus on my recovery and getting back behind the wheel as soon as possible.” concluded the Welsh driver, who hasn’t specified how long that might take.

Greensmith, the ideal replacement for Evans

Malcolm Wilson’s team has reacted quickly to the eventuality and moved swiftly to find a replacement for Elfyn Evans. Gus Greensmith will take the seat of one of their cars.

His experience behind the wheel of the Ford Fiesta WRC, with which he debuted in Rally Portugal, has made of the Briton the better-suited candidate to take Evans’ seat immediately. 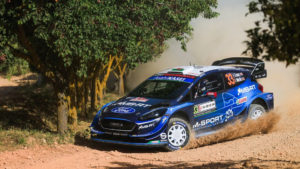 The need to replace their leader has completely disturbed the plans of the M-Sport WRT team for the upcoming Rally Finland. The British team was already in the middle of their test programme in preparation of the Scandinavian Raid, which is due to take place in two weeks.

Luckily, Greensmith and his co-pilot Elliott Edmondson were present during the team’s training sessions as they readied the final details for the debut of the Ford Fiesta R5 Mk.II of the WRC2 category in Finland.

The line-up of the British team will, therefore, consist of Greensmith and Teemu Suninen as well as Hayden Paydon. The New Zealander, who lost his seat in the Hyundai WRT at the end of 2018 in favour of Sebastien Loeb, makes some sporadic appearances at the WRC.

Eric Camilli will thus be the only driver from the blue team riding the new Ford Fiesta R5 at the WRC2 Pro category in Rally Finland.

Richard Millener, M-Sport top chief, made the following statement in regard to the whole issue:

“It’s obviously a real shame for everyone not to see Elfyn and Scott in Finland, but when you’re medically advised not to contest an event that’s not something you can ignore (…) Finland is such a physically demanding rally, and Elfyn’s fitness is our main concern. He has all the support from the team and he is focused on making a quick recovery”.

As per Elfyn Evans’ replacement choice, Millener explained: “After their impressive debut with the World Rally Car earlier this year, we felt it only right to offer the seat to Gus and Elliot (…) I know they’ll make the most of this opportunity, and they’ll have a pre-event test to ensure they’re as prepared as they can be for the challenges ahead.”