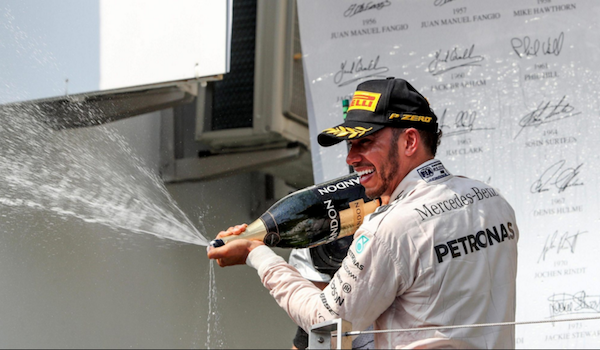 Lewis Hamilton rockets into his fourth world championship. Moreover, the sensation today is that this will actually happen, unless any unexpected chain of events takes place. The doubts at the start of the competition seems to be a distant memory in the mind of the pilot of that Mercedes who lately flies on the track: this weekend in Hungary he added the fifth victory in the last six races, and the access to a leadership that displaces his team member Nico Rosberg, who is now only at 6 points, but showing an inability to stop such a progress. Hungary also highlights the strong tendency of the German team domination in a grid where Ferrari has improved details within the weakness, Red Bull is growing up as a good entertainer, and the rest is at other action stage.

“It’s a pity we couldn’t improve this afternoon but still I think we were best of the rest today”. Were the words coming from Fernando Alonso (McLaren) at the end of the Hungarian competition; the two times champion spoke positively, but at the same time realistic (resigned) facing a situation that keeps him far away from the top. The battle against this compatriot Carlos Sainz (Toro Rosso) for the seventh position was gorgeous but it was off-recorded, as the camera just focused the domination of a Hamilton (Mercedes) who doesn’t show ferocity anymore, or any point of anxiety seen at the previous competitions. He follows his line and even without any consideration to his teammate Rosberg. The Brit relaxes his expression at the podium, just one more, probably being aware that another World Champioship is very close if no unexpected events come up.

Behind him, neither many moves nor many exciting moments had been registered. Besides Alonso-Sáinz struggling, the best pictures were the escalation of Raikkonen (Ferrari) to the sixth position coming from the back of the grid, although sadly he couldn’t get over a fizzy Verstappen (Red Bull). Neither Vettel could beat Ricciardo, proving that Ferrari’s advance is not improving as quickly as they would like, or being effective to rule over a Red Bull team that remains the worthy news of the picture.