Just a few hours after his Formula 1 farewell at the Grand Prix of Abu Dhabi, Fernando Alonso stepped into his overalls once again. The occasion: A promotional event at the International Circuit of Bahrain together with Jimmie Johnson, the seven-time champion of the NASCAR CUP.

There, the two masters of the wheel have exchanged their respective racing cars. Thus, the Spaniard has climbed into Johnson’s NASCAR Chevrolet, and the latter has done the same with the Formula 1 McLaren MP4-28 (2013), which is powered by a Mercedes V8 engine.

Both were visibly eager to tackle the challenge. An exciting four-hours in which this pair of motorsport legends has had an amazing time.

At nine in the morning, the Spaniard was already receiving the first indications from Jimmie from the pitlane of the Sakhir circuit. A small briefing regarding the main characteristics of the NASCAR car.  ‘El Nano’, used to the technical jargon, was nodding away. Later, it was the American who received the instructions.

Before the start of the ‘competition’, the Spaniard said he did not consider the experiment as a test to decide his possible move to NASCAR. “It’s pure fun,” he explained.

“I cannot guarantee 100% that I will not enjoy so much to want to have a competitive opportunity in the future” –  said the Spaniard leaving the door open to the American event. “I love trying new things, discovering new events and series, so it will be a special day for me.” –  he also added without clarifying any further. 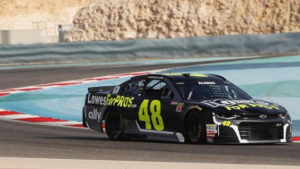 With these statements, Fernando Alonso has wanted to settle the rumours that have him already at next year’s 24 Hours of Daytona.

The Daytona 24 is the second most famous car race in the United States after the Indianapolis 500. And Fernando Alonso has always felt a strong attraction to the USA racing world…

Things got started before ten o’clock in the morning at Bahrain’s racetrack. By that time Alonso had already completed the installation lap onboard the MP4-28. 25 minutes after that, he was leaving the garage on board the  Chevrolet No.48 of Jimmie Johnson. It was time to try the black missile of the Hendrick Motorsport team.

Meanwhile, his American colleague was listening to the last indications from the McLaren staff. Shortly after, at 11:11, Jimmie appeared on the Arab track on board the orange vehicle. The challenge was underway. After a pit stop to adjust the helmet, the American driver flew onboard the papaya-coloured car. He clocked in at 1:41.7 compared to the 1: 40.2 of Fernando Alonso earlier in the day. 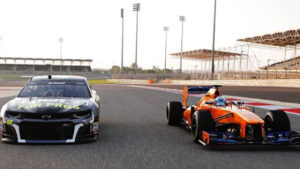 At 12:35, Alonso made a couple of long runs and decided to return to boxes. The American legend then got to the track once more, while the Spaniard watched him carefully from the finish line. It was Alonso’s turn again at 13:05, a minute after Johnson got off the car from Woking. More driver changes at 13:21. Fernando, back to the garage, and Jimmie, giving it all on the asphalt of Sakhir.

The end of a thrilling experience

The test came to an end at 14:20. As a finishing touch to the day, both pilots made a few ‘doughnuts‘ and burned wheel at the Persian Gulf track. Fernando Alonso, by the way, would have improved Johnson’s time by about three seconds! 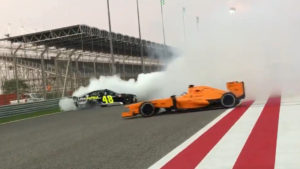 The man from California, on the other hand, could have clocked a better time of 1:40.4 on board the McLaren, just three-tenths of a second below the Spaniard. There is no denying that these two have dynamite in their hands, although the Spaniard’s talent, in particular, is from another world.
He has once again shown his great dexterity and speed as well as his great capacity to adapt to any vehicle. Such adaptability brings him closer to his goal, becoming the most complete pilot in history. He is already eying the Triple Crown, among other challenges …