When there is less than a week left until the beginning of the 2019 Dakar Rally, we will go over how Carlos Sainz’s car of the 2019 Dakar is. It is the ‘Mini John Cooper Works Buggy‘, a two-wheel drive (4×2) that will defend his title in the 41st edition of the raid.

The driver from Madrid will be part of the X-Ride ‘dream team’ together with Stéphane Peterhansel and Cyril Despres. This ‘three musketeers’ add a total of 20 title combined. 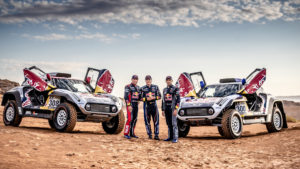 The two-times champion’s car is an improved version of the vehicle that debuted in the Dakar in 2018. Engineers have fixed up all aspects that proved problematic last year but just as it was the case with the Peugeot 3008DKR, only Carlos Sainz’ skill can make the new model a winning car.

The brand new sequential six-gear gearbox has been developed by Xtrac. It also incorporates a self-blocking differential. Unconventionally, the clutch is located at the back to allow for its quick and simple replacement if necessary. 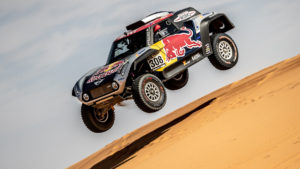 Why did Sainz choose a buggy?

After winning the 2018 edition with Peugeot, and the Scuderia retiring from the Dakar this year, Sainz tested the Toyota and both Mini cars, the ‘conventional’ 4×4 and the 4×2 buggy.

Finally, he opted for the German car, and specifically, for that last model, the two-wheel drive Mini. The fact that over 70% of the 2019 itinerary will be on sand has had a lot to do with his final decision. 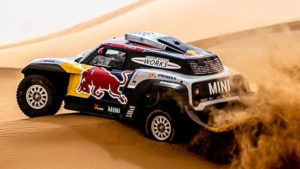 The dynamic characteristics of the buggy give it a certain advantage on sand. Peugeot, was aware of this as this was their vehicle of choice when they returned to the competition.

Race regulations allow for the minimum weight of the buggies to be significantly lower than that of other registered vehicles. Their lower weight translates in better performance and increased maneuverability in sandy terrain. 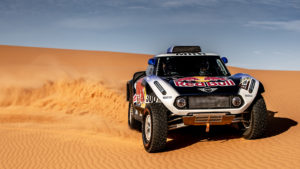 In addition to that, buggies can have bigger wheels (940 mm in diameter compared to the 810 mm of other cars), and so they can use 17-inch tires instead of the usual 16, as well as being equipped with larger brakes.

Despite all those advantages, this will be no small challenge for the Spaniard. The X-Ride project is a private venture and although it has the technical support BMW Motorsport it clearly lacks the means of other world-class manufacturer teams. The competition is going to be fierce.

It is obvious that the ‘dream team’ of Carlos Sainz – twice winner and defending champion – Stéphane Peterhansel – the most successful driver in history- and Cyril Despres onboard the Mini John Cooper Works Buggy, is one of the favorites. Another favorite drive, the Catalan Nani Roma also belongs to the X-Ride team. 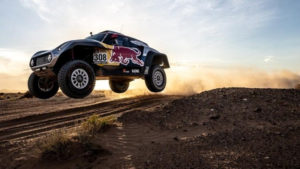 Other title candidates include the Overdrive squad with Nasser Al-Attiyah, Giniel de Villiers and Bernhard Ten Brinke at the wheel of the Toyota Hillux. Someone else to watch is Sebastien Loeb who will be driving a 3008 Peugeot 3008 DKR developed by private team PH-Sport and supported by Red Bull.