This weekend (26th-28th Octobre) takes place the Australian Grand Prix of MotoGP at the Phillip Island circuit with this season’s title already decided in favour of seven-time champion Marc Márquez.

The Spanish pilot sealed the deal at last week’s Japanese Grand Prix in Motegi but that won’t stop him from attempting a four consecutive win, and his ninth of the season continuing with his lucky strike.

The Spaniard has made his intentions clear as he declared to the press that he is out to win the Australian Grand Prix of MotoGP. Moreover, both the team and constructor’s titles are yet to be  decided.

Marquez has also said he doesn’t want to repeat the mistake he made in 2016 when already crowned with his 4th MotoGP world title, fell over at the Australian GP of MotoGP jeopardising his team’s position. “I hope not to mess things up as I did then” said the 25-year-old pilot. 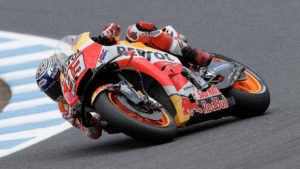 The very technical and twisty Aussi circuit is however one of the five-time World MotoGP Champion’s favourites. Marquez has won the Australian Grand Prix in two occasions in MotoGP (2015, 2017) and in one in 125 cc (2010).

Ducati without Lorenzo and with Bautista

Andrea Dovizioso has traditionally struggled with the 4.448 metres and 12 turns of the Aussi track. The second pilot in the standings has actually  never climbed to the top of the podium at Phillip Island, where he only managed to finish 13th in 2017.

It is obvious that this is not a track where he feels comfortable, but with such a bike and talent he can never be ruled out of the podium. His situation is very much the same as compatriot’s Danilo Petrucci, who has failed to shine over the last few races. 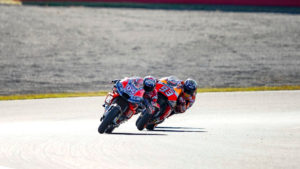 Jorge Lorenzo will be a hard-felt absence for Ducati. After missing both the Japanese and Thai GPs, the pilot from Mallorca has undergone surgery last Tuesday to repair the ligaments of his injured left wrist. Although he hasn’t ruled out competing in Malaysia, it is perhaps more likely to expect his comeback on the last race of the season at the Spanish Grand Prix.

Replacing Lorenzo is Alvaro Bautista, who sealed an outstanding fifth position at the last GP in Motegi. The Spaniard, who won the 2006, 125 cc World Title in the very same Australian circuit, has another chance to shine this weekend. He will thus ride Lorenzo’s #99 bike before moving on to the Superbikes World Championship in 2019.

A lucky circuit for Rossi

Valentino Rossi and Maverick Viñales will not go down without a fight at the Australian Grand Prix of MotoGP. With the mechanical issues of their Yamahas behind, they both will be looking forward to this weekend’s race.

As long as their bikes respond to the challenge they are bound to sweat it out, after all, this is Rossi’s territory. Drawn level with local hero Casey Stoner, the Yamaha #46 has won at the Phillip Island track in no less than six occasions.

It would not come as a surprise if Johann Zarco conquers one of the top positions at the Australian Grand Prix of MotoGP.

Similarly, cheered on by his home crowd, local pilot Jack Miller could put up a good performance. The pilot from Townsville is likely to at least ride at the head of the race.

Cal Crutchlow is another contender for a top place in Australia. The Briton came in fifth in Motegi and as already won at Phillip Island on the 2016 Australian Grand Prix of MotoGP.

Andrea Iannone and Alex Rins, onboard their official Suzukies, will also attempt to claim a spot on the podium. The Spanish pilot is going through a great moment in his career. He was third in Japan and he will surely attempt to repeat or improve, the feat.