The ninth edition of the legendary raid has come to an end after 5.000 gruelling kilometres, 2.950 of them timed, divided into 10 stages and across three different countries: Russia, Mongolia and China.

The rally began on the 7th of July in Irkutsk (Siberia) with an all-time record 97 participants, 77 of which have made it to the chequered flag.

The couple made up of Qatari driver Nasser Al-Attiyah and French co-pilot Mathieu Baumel has dominated the 2019 Silk Way Rally from beginning to end. The pair had a clean sweep of every single special onboard their #201 Toyota Hilux V8 4×4. 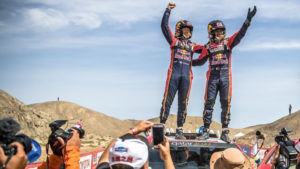 In an overwhelming show of strength, it took the couple a total of  24 hours, 25 minutes and 29 seconds to complete the itinerary. Having also won the Dakar 2019, this pair seems to have been blessed by the gods of speed.

Luck got on their side right from the second stage of the 2019 Silk Way Rally, when title holder, the Saudi Al Rajhi, suffered a fault in his alternator and water pump which lead to a total engine breakdown and to the champion’s retirement. From then on, Al-Attiyah and Baumel’s strength were largely unchallenged. 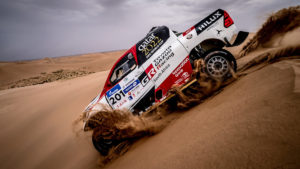 The Chinese couple of Wei Han and Liao Min, behind the wheel of their buggy GEEL SMG #208, had no choice but to settle for second, 1 hour, 25 minutes and 4 seconds behind the winners of 2019 Silk Way Rally.

The French duo made up of Jérôme Pelichet and Pascal Larroque, driving the Optimus #212 completed the cars podium at 1 hour, 43 minutes and 39 seconds.

Sam Sunderland’s victory in the new bike category started to take shape during the fourth, 470,19-kilometre, timed stage. Previous day winner, the Argentinian Kevin Benavides (#7) had to open up the track with his Honda CRF450 Rally.

The subsequent slight disadvantage coupled with a fault in his front brake on km 40, had him waist plenty of precious time and lose the leadership of the Silk Way Rally 2019.

Benavides fell back to fourth in the standings with new leader Sunderland harvesting an extra 15 minutes and 38 seconds. From then on, the Briton just had to comfortably manage the time differences with his pursuing rivals onboard his KTM 450 Rally.

In another of their usual power displays, the Kamaz Russian Army has taken all the three steps of the podium on the dessert mastodon category. The winners were the 43509 crew composed of Anton Shibalov, Dmitrii Nikitin and Ivan Tatarinov (#303) after a 26 hours, 1 minute and 40-second battle. 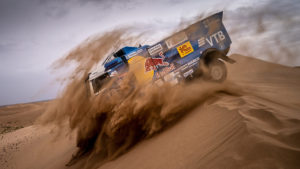 Their compatriots Andrey Karginov, Andrey Mokeev and Ivan Malkov (#300) were second by 25 minutes and 22 seconds and Airat Mardeev, Dmitrii Svistunov and Sergei Krenev (#302) closed the podium 52 minutes and 5 seconds after the victors.