26 26 Feb, 2019
2019 MotoGP pre-season testing in Qatar
The 2019 Qatar MotoGP Pre-season testing sessions have concluded this Monday. During three whole days, the eleven teams and his 22 riders  have been tuning their bikes at the Losail Circuit which will also host the inaugural 2019 MotoGP Calendar on March the 10th. 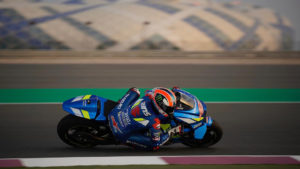 Pilots have taken care of all the details before the start of the new season, although some might have kept a card or two up their sleeve. The battle of minds and strategy has begun, where, to preserve the surprise factor.

Everyone attempts to conceal important clues from the enemy. But regardless, testing sessions always evidence some valuable information for us to analyse.

Day 3: Viñales wins over Rins…and all the others

Maverick Viñales has come out on top after 2019 Qatar MotoGP Pre-season testing. The pilot from Rosas has sealed a sensational time of 1: 54.208 seconds; +0,233 seconds ahead of the remarkable rookie Fabio Quartararo.

Marc Marquez achieved the third best time (with a fall included) at +0.405 seconds behind the winner and Valentino was fourth at +0.443. Jorge Lorenzo closed the top five at +0.445 seconds. Those five best times from the championship’s favourite pilots send a strong message to their adversaries.

Alex Rins (+0.644) and Joan Mir (+0789) from Suzuki have finished eleventh and twelfth respectively, far from the positions of previous days. Andrea Dovizioso, last year’s sub-champion, finished almost a second behind the leader and in the fifteenth position.

Danilo Petrucci, his new teammate at Ducati, has finished ninth, six-tenths behind the leader. In any case, it is still early days to rule the red missiles out from the top battles. 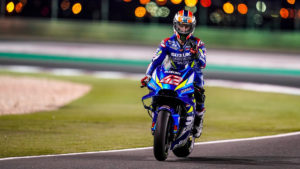 As brands go, the five top positions have been shared out between Yamaha (3) and Honda (2). All in all, a very evenly matched session with the first 15 pilots finishing within one minute. Extraordinary!

The rivalry between Spaniards Alex Rins (Suzuki) and Maverick Viñales (Yamaha) goes way back as it has become apparent after the intense second day of pre-season tests. Viñales signed the best time on the first day at Losail but Rins managed to topple him on the second with Viñales finishing +0.057 seconds behind. 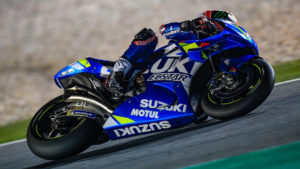 After this unruly duo came the brilliant French debutant Fabio Quartararo at only +0.315 seconds. The fourth fastest pilot was an amazing Danilo Petrucci with a time of +0.360 and just ahead of Marc Márquez at +0.415 seconds. The current champion is slowly adapting to his new bike and recovering from his injured shoulder. 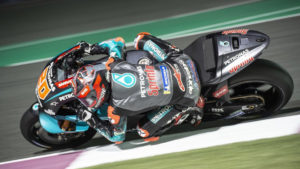 The accumulation of dust and sand on the track of Losail was one of the highlights on the first day of 2019 Qatar MotoGP Pre-season testing. Another one was the Spanish duet composed of Maverick Viñales (Yamaha) and Alex Rins (Suzuki).

Both pilots brought their battel from the Sepang tests to the Persian Gulf. First blow was dealt by Viñales (Yamaha) with a time of 1: 55.051. Rins, his intimate enemy came just 0.108 seconds behind. 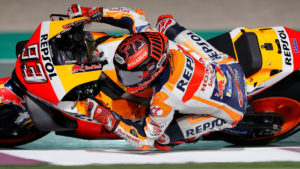 Nearly half a second slower were the Ducatis of Andrea Dovizioso (+0.499) and Danilo Petrucci (+0.543). Behind the Italian pair came Valentino Rossi with his Yamaha (+0.553). Marc Márquez closed the top ten with +1,113 seconds, while his new teammate Jorge Lorenzo finished twenty-first with a time of +2,039 seconds.

Yamaha’s progress with Viñales the fastest

The 2019 MotoGP preseason testing in Qatar has revealed some interesting issues. The times achieved by Yamaha, for instance, demonstrate that the Iwata machine is making due progress. Maverick Viñales dominated two of the three days of testing and finished second on the other one. But perhaps most importantly is the fact that the Spanish pilot has been able to maintain a strong and steady pace throughout.

The M1 has evolved from its 2018 predecessor. It remains to establish how far the Japanese machine has grown in relation to its rivals. Collectively the Japanese team seems to have woken up from the lethargy in which it was immersed. Now they appear more confident, with greater purpose and in higher spirits. Valentino Rossi has acknowledged this.

The Italian star, however, has not felt as comfortable with his new bike as his teammate. It is a question of time. Fabio Quartararo’s performance is also living proof of Yamaha’s improvement. The French rookie from the Petronas Sepang Racing satellite team finished second in the last session and third in the second.

Honda, faster despite its convalescing pilots

Honda’s dynamics has been very different from that of its rivals. Hampered by the physical condition of its riders (Marc Márquez and Jorge Lorenzo), they have not raced to their full potential. The defending champion remained discreetly in the background … until he decided to jump into action.

He finished the first day of trials in Losail with an unimpressive tenth position. A day later he was fifth and, in the farewell session, he sealed the best time. 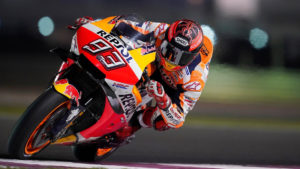 Despite his convalescing shoulder, which is healing as planned, Marquez has shown his claws a little bit. Jorge Lorenzo, who missed the Sepang tests after undergoing a wrist operation, has devoted his time to get familiar with his bike and its ergonomics. 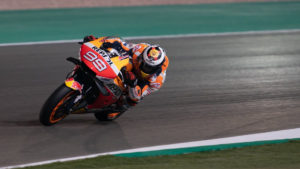 His wrist is still giving him some trouble and therefore, his 21st, 18th and 5th places in Losail seem anecdotic. On the technical level, the firm of the golden wings has taken a leap in terms of top speed.

One of the big sensations of this 2019 Qatar MotoGP Pre-season testing has been Suzuki and its very solid pair of pilots, former Moto2 Joan Mir and Alex Rins. The latter has been one of this winter’s protagonists. 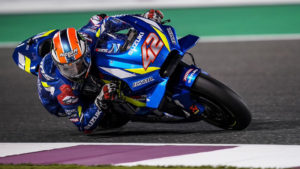 His duels with Viñales has demonstrated his great speed. The driver from Barcelona is more than ready to keep adding podiums to his curriculum and to start sealing some victories. He finished second on the first and second days at the 2019 Qatar MotoGP Pre-season testing. 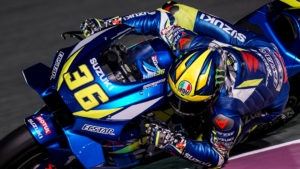 Mir has also kept close to the top ten during the three days and all this wouldn’t have been possible without the great behaviour of their Suzuki. Their bike is performing at a great pace and maintains the ascending line with which it ended in 2018.

Ducati has hardly shown its potential at the asphalt of Losail at the 2019 Qatar MotoGP Pre-season testing. The world’s number two, Andrea Dovizioso, has dedicated the sessions to trying new pieces and elements, without caring much about the stop-watch. Newcomer Danilo Petrucci, for his part, shone with a fourth position on the first and second days and a ninth position in the closing test of Losail.